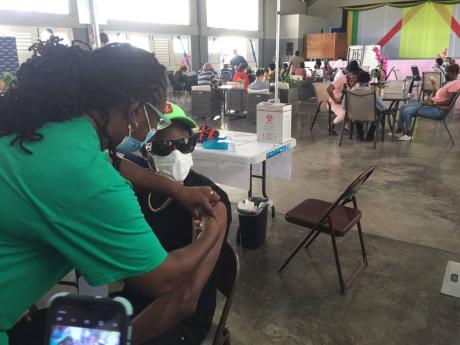 Speaking to THE STAR yesterday, the entertainer described the experience as "normal". But while most people complain about flu-like symptoms and sore arms, the Fling Yuh Shoulder artiste said he has not felt any side effects.

"Sometimes the mind is a very powerful thing. I never got any symptoms at all. I even asked the doctor if I could drink after receiving the vaccine," Ding Dong said, adding that he would be performing at the water party on Dream Weekend. "I drove all the way from Kingston to Negril on Saturday feeling good and I am here now, still feeling good."

He said that he had planned to get vaccinated before now, but timing and the limited availability of the vaccine in Jamaica prevented him from doing so.

"I been made up my mind to get vaccination. It's just the time and I tried on two occasions to see if I could get it, but there wasn't enough vaccine and, of course, the focus was on the older groups. There were age restrictions, so I just waited until my turn. As soon as I got the call that I could get it now, I went to do it," he said.

Ding Dong added: "I made that conscious decision for myself. I am not here to tell anyone to go do what they do or don't want to do."

The deejay has, throughout the pandemic, lobbied for protocols and even recorded the single Inside, which spoke to staying safe and following the rules of lockdown. He said he wants to see the entertainment industry return to some level of normality.

"I don't understand the reasons for the negativity around the vaccine because majority, if not all of us, got vaccinated when we young, even though that was for a different time and things. So I believe sooner or later we all have to take it," he said.

He was not the only Ravers member to be vaccinated on the weekend. Bravo, whose voice is heard on some of the hits like Dweet (Genna Bounce), Wul Up and Gas, also got his first dose. He shared that DJ Scotty, of Romeich Entertainment, also received the vaccine.

"Me did feel some little cramps in my knee and leg but I ended up taking a painkiller. Everybody different still, meaning our immune systems ah work differently. So the reaction will not be the same for me and Ding or anyone else that takes the vaccine. Otherwise, me all right so far," Bravo said.