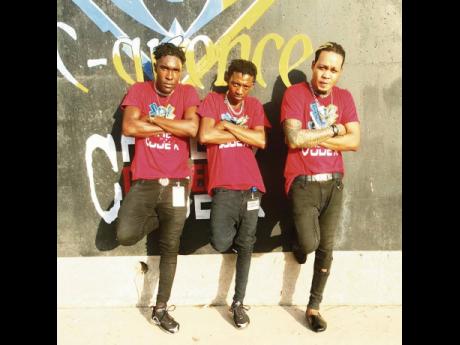 From left: Silk Codex, Bling Codex and Snowflakes show that there is strength in unity.

Unifying teams is not always something you see happening in dancehall culture, but dance teams C-quence and Codex have joined forces and will perform as a merged squad going forward.

Clinton Snow, who goes by the moniker Snowflakes, is the leader of C-quence and co-leader of the newly merged team. He explained that this fusion was ideal since both groups shared similar dancing styles and energy. From his days at Calabar High School, Snowflakes was always dancing. That was 17 years ago. But he remained in the shadows until one day he realised his talent and tapped into his true potential.

Four years ago, C-quence emerged on the dance scene, going by a different name. But they changed it when they auditioned to compete on Dancing Dynamites. Through brainstorming for a catchier title, C-quence was suggested, and since it adequately depicted how they moved, the name change was official.

C-quence and Codex used to perform on stage on the hotel circuit for a company called Harmony. There they were trained in modern contemporary, salsa, African, hip hop and dancehall dance. But, with COVID-19 placing a damper on the entertainment sector, shows have been rolling over slower than usual. They have since been putting their versatility to good use in promotional videos for artistes and music videos.

Rejecting the idea of a name change for the newly formed team, they chose instead to dance under both crew titles. "If you say Codex, you're saying C-quence as well, and if you say C-quence, you say Codex," he added. Altogether, the group is made up of about 30 members who reside in Jamaica and overseas.

The merged team has produced recent dances such as 'Wave Rider', 'Bling Bounce', and 'COVID-19'. All have been showcased on their social media platforms to the delight of fans.

"We have been teaching students from Germany and Peru, who flew in for classes. People from other countries are loving our dance moves and rocking to them," he said.

Snowflakes gave more details into how he created his new dance, 'Snow Slide'. "While performing at the hotel, I gave the audience a little brawta. They saw the dance and they loved it. They even named it Snow Slide, because of my name, and the move is like a slide. So I decided to keep the name and run with it," he said.

They are also currently working on CC Marketing, which is geared towards providing performers for events and occasions, like parties. The crew hopes to continue their advocacy for unity among dancers.