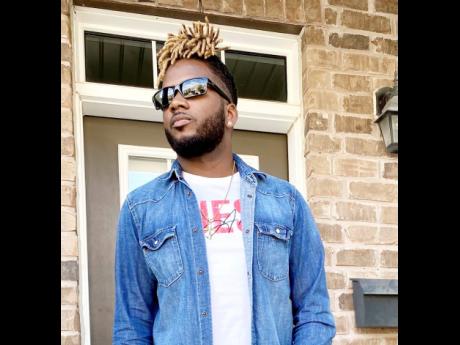 Spending one year off the scene following a life-threatening accident tested the patience of aspiring reggae-dancehall artiste Daine Blaze; however, the pandemic has proven to be an even greater test.

"I always had the drive and determination that is needed to push my career in music to the next level, but I had to learn that wanting something at a particular time does not mean it will happen in the time you want it," Daine Blaze told THE STAR.

"Having patience is the greatest lesson a star on the rise can learn because, trust me, it will work when it supposed to work; but still put in the work as you wait for it to happen," which, he explained, is part of the message in his October-released single, Push.

However, as a father of two daughters (ages eight and 11), mapping out a career has not been his only mission. Daine Blaze shared that his children are his life and though they are not in Jamaica, dedicating time to the music can interfere with important daddy-daughter time.

"The longest I have been separated from my children was about three years, and though I saw them last year, 2020 feels like the longest with all that has happened," he said. "They are in the UK, and the plan was for them to visit again for the holidays. Obviously, those plans get kicked to the side ... so, same way as a father, I have to show patience in everything."

Presently in Canada working on a few productions, he continued, "And I am still having to work. There are no shows, but interviews with radio stations and networking for new projects."

One of 17 children between his mother and father, Daine Blaze says family has been a big inspiration on his decision to do music. He says he was brought up on Jamaica's musical culture, with his father being the man behind Black Magic Sound, a sound system from the Waltham Park community.

Daine Blaze said, "I have seen the impact of sound systems and mixtapes from me a likkle youth. My father sound wasn't a big name, but [it] still meant a great deal, and even recently, on the topic of mixtapes, it has been helping many of our Jamaican artistes to stay in the streets."

The singjay is currently working on a mixtape with his team City Kyngz Entertainment, as a prelude to an EP which has been put on hold due to lack of opportunities to perform live as part of on-the-road promotion.

"I also have a lot of songs recorded, some yet to be released, and want to do an actual compilation of the music. Many artistes have put out mixtapes, which shows it can be done. It is an in-house production with City Kyngz and as far as putting it together, we are making good progress because the work never stops - not even in a pandemic," he said.

1. What's one thing people don't know about Daine Blaze? I am an audio engineer.

3. First dancehall CD gifted or purchased: It was Bounty Killer's album, My Xperience.

4. Female dancehall artiste listened to the most in 2020: Jada Kingdom.

5. Get to know me by listening to my new single, Firm.