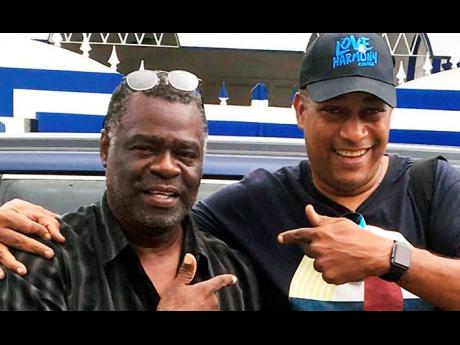 Barry O'Hare, a renowned audio engineer who died on Saturday, deserves all the credit in the world for his work in music, his cousin Stephen Stewart, says.

O'Hare, 56, passed away at the University Hospital of the West Indies in St Andrew, where he was admitted after showing COVID-19 symptoms.

Stewart, who like O'Hare is an engineer, said his cousin "was feeling uncomfortable and was experiencing complications with his breathing" a few days prior to him being admitted, but showed signs of improvement.

"He would call me every night and morning to reassure me by saying, 'Me still deh yah'. Friday we spoke for a longer time in the morning, and again in the evening, where he sounded much better, 'Stewart, me ah call yuh right back." It was a brighter Barry."

No call came from O'Hare on Saturday morning. The worst had happened.

O'Hare and Stewart worked with Grammy Award-winning producer Don Mizell on Walt Disney Records' Sebastian sequel LP to The Little Mermaid, a project soundtrack, along with members of Third World band and was certified gold.

O'Hare received the JaRIA Honour Award for extraordinary impact as an engineer on the reggae industry. "When he called to tell me about being among the names to be recognised by JaRIA in 2018, he was so excited," Stewart said.

O'Hare's musical journey began in church where he played the piano and organ. He and Stewart, being the sons of ministers of religion, established Parsons Pickney Productions, which produced gospel as well as secular music. The two audio engineers also worked together for many decades at Grove Recording Studios in St Ann, producing large events such as White River Reggae Bash, promoted by Irie FM in the early 1990s.

"It was pure genius at work; what was novel about that is, any significant holiday of the year we'd put on a concert that was then broadcasted with Irie FM in stereo islandwide, so people could get to hear the high quality which was new at the time. The whole propagation of it was because of the work Barry and I did, but he deserves the credit for the things that were pulled off, setting trends, and for that level of ingenuity," an emotional Stewart told THE STAR.

"We who are behind the scenes hardly get the credit; I want the people to know how hard-working he was."

"His first love was music, and even after work at Grove Recording Studios paused due to the owner, Karl Young's passing, he continued to dedicate time to doing it. I don't want people to just focus on his death, but that he did great work, pioneering work, and artistes like Tanya Stephens, Jack Radics and Prezident Brown can attest to that. These are entertainers we brought in over the years, among others. You name it, he did it," said Stewart.