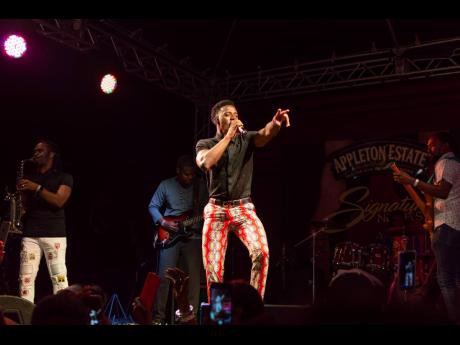 His performance was energetic, soulful, and heartfelt, so much so that the artiste was called back on stage three times before the crowd was satisfied, and even then, the people demanded more.

"It's a good feeling to see the people wanting more because we have more to give them. We originally planned for the performance to be about 45 minutes because we were keeping the state of emergency in mind. But after seeing how badly the people wanted it, I was like wow, maybe we should have rehearsed some more," said Virgo.

Patrons danced, rocked, and toasted as the reggae star pulled for some of the most beloved records from his catalogue, including Cya Sleep, Dutty Man, and the more recently released, Melanin.

"It was a surprise to see how many people came out, even with the state of emergency and the threat of rain. And after the show, people didn't want to leave. So it turned out to be amazing," said Virgo.

Always eager to highlight the artistes who came before him, Virgo was sure to take the crowd on a journey back in time, paying homage to rocksteady and reggae stalwarts, Alton Ellis and Gregory Isaacs, among others. The artiste performed records such as It Hurts Me So and Night Nurse.

"It's always a good vibe performing at Appleton Signature Nights. It was a true blessing; to see people calling us back on stage and enjoying every moment of it, can't forget a vibe like that," he said.

Marsha Lumley, marketing director at J. Wray & Nephew, was blown away by the reception Virgo got.

"Romain did a stunning job entertaining the people, and keeping them on their toes throughout his performance. The turnout was great as well. Fans were flooding the entrance to backstage eager to see Romain, and this is after he was called back on stage thrice!" she said.