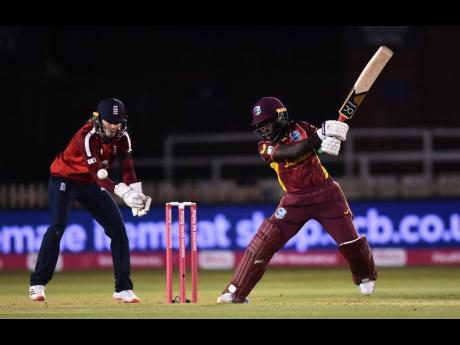 The West Indies women's team will get their second taste of international cricket action in England today when they take on their English counterparts in the second T20 International in Derby, starting at noon.

The Stafanie Taylor-led Windies were outplayed by England in the opening match as they went down by 47 runs despite a good effort with the bat from Deandra Dottin, who made 69.

Dottin's knock, which was her highest T20 score against England, stood out on a disappointing-looking Windies scorecard, with extras accounting for the second most runs of 17 in their total of 116 for six in 20 overs.

Dottin highlighted that the team will need to get out of the blocks quicker if they are to put up a fight against a well-balanced England team.

"After the opening game, I think we need to reflect on where we went wrong as a bowling and batting team. I think we will actually come out on top in the next game," said Dottin.

No other Windies batter got into double figures in the opening fixture, with Hayley Matthews and captain Stafanie Taylor only managing three and eight, respectively.

Another issue facing the Andre Coley-coached team is the accumulation of dot balls, with Dottin herself soaking up 21 in her innings. Boundaries have also been at a premium for the regional side, who hit just one four between the fifth and the 11th over.

"We didn't capitalise on the first six overs, and we as a team needed to get off to a flyer. We need to also correct the dot balls," added Dottin.

The Windies may opt to bring in an additional spinner to support the off spin of Matthews and Taylor to counter the free-flowing opening batter Tammy Beaumont, who top-scored for England with 62 in the opening contest.

The regional side will be encouraged by the opening pace attack which picked up four wickets, with Shakera Selman claiming her second-best international figures of three for 26 and Shamelia Connell bowling with pace to claim one wicket for 27 runs.