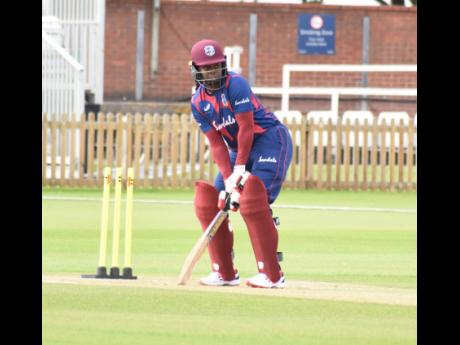 The Jamaican members of the West Indies Women's squad on the tour of England, minus the absent captain Stafanie Taylor, continue to find the going tough as Deandra Dottin's XI beat a Shakera Selman's XI by 26 runs in the second practice match at the Incora County Ground.

Jamaican middle-order batter Natasha McLean was only able to get seven runs for Dottin's XI, who posted 132 for five in their allotted 20 overs.

Opener Lee-Ann Kirby was the star with the bat, as she pulverised the bowling hitting an unbeaten 85 from 63 balls.

The Trinidadian struck seven fours and three sixes as she and captain Dottin posted 55 runs in nine overs and two deliveries for the opening wicket before Dottin fell to Shabika Gajnabi for 29.

Hayley Matthews was the pick of the bowlers for Team Selman, finishing with figures of two for 31 from her four overs.

Selman's XI struggled to get the runs, and in the end, they were restricted to 106 for four with three batters, Matthews, Gajnabi and Jamaican Chinelle Henry getting 27 runs.

Another Jamaican, Chadean Nation, once again failed to make a mark, as she made four. Shamilia Connell was the best bowler for Team Dottin, finishing with figures of two for 18 from her four overs.

Winning captain Dottin says the valuable time out in the middle is the ideal tonic for the team as they get set to square off with their English counterparts next week in the five-match Twenty20 series.

"These two practice matches felt good to be back out in the middle playing competitive cricket," she said. "Personally, it was nice spending some time at the crease after such a long layoff. Generally, we are all looking and feeling good, after the last couple weeks of training. So, we're just looking forward now to start the series on Monday and put all that hard work into action."