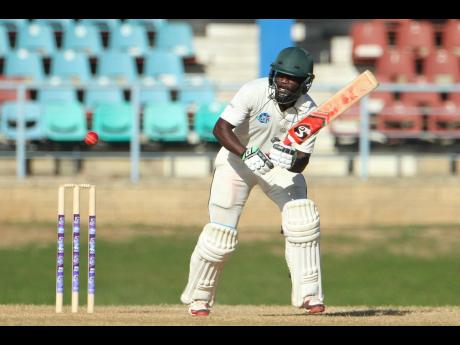 Former captain Paul Palmer Jnr scored his second first-class hundred to secure an unlikely draw for the Jamaica Scorpions against the Trinidad & Tobago Red Force on the final day of their West Indies Championship match at the Brian Lara Cricket Academy.

The left hander batted the entire fourth day to score a patient unbeaten 116 from 217 balls, as the Scorpions, who resumed on 86 for 1 after being asked to following on, reached 300 for 8 when stumps were drawn.

Palmer, who scored a half century in the first innings, shared in a 131 run third wicket stand with Jermaine Blackwood, who made 78 from 192 balls, which included nine fours.

The fall of Blackwood's wicket triggered a mini collapse somewhat for the Scorpions, who moved from 223 for three to 237 for six.

Derval Green then joined Palmer and the pair used up some 10 overs in a 29 run seventh-wicket partnership to take the visitors closer to safety late on the final day.

Despite losing Green and Mindley, Palmer, 116 and Dennis Bulli, three not out, stood firm until the match was called off.

Assistant coach Nikita Miller praised the effort of the players despite the early setback.

"This draw feels like a win for us and I must commend the players for their commitment and dedication. T&T batted us out of the game but we didn't give up. I must single out Man-of-the-Match Paul Palmer for a brilliant batting effort, he was not part of the squad initially but he came in as a replacement for Bonner and did a very good job with the bat and hats off to him and the team for a total team effort," said Miller.

Final scores in the match. Trinidad & Tobago Red Force 460 for 4 declared, Jamaica Scorpions 278 all out and 300 for eight.