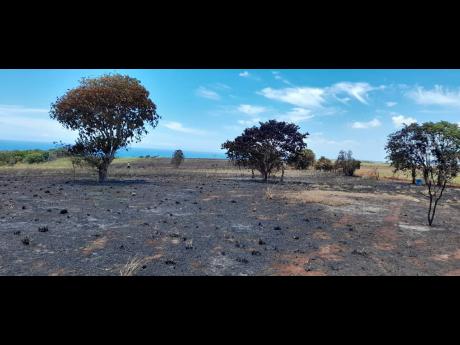 A scorched section of a farm in Flagaman, St Elizabeth, following a blaze in August. 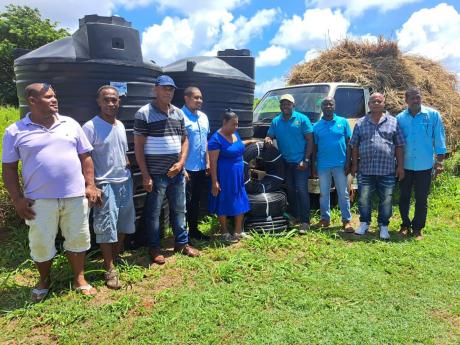 Farmers from Flagaman in St Elizabeth, who were affected by fire in August, were happy to receive assistance from government and private sector bodies on Thursday.
1
2

Approximately three months after a bushfire destroyed 20 hectares of farm produce, members of the Flagaman-based farmer's benevolence society in St Elizabeth have welcomed the much-needed assistance of farm tools and fertilisers from corporate agricultural stakeholders.

The relief items provided to the more than 12 affected farmers came through a collaboration with the Ministry of Agriculture and Fisheries, H & L Agro Limited, Hi-Pro Ace Supercentre, Newport-Fersan (Jamaica), St Jago Farm and Hardware Suppliers Limited and Food for the Poor.

"We don't normally get a lot of support, but it is really important that the ministry of agriculture and other critical stakeholders have decided to give back, especially when we have suffered so much over the past few months," Latoya Myrie, secretary for the Flagaman Farmers Benevolence Society, told THE WEEKEND STAR on Thursday.

Farmers were presented with fertilisers, irrigation kits, water tanks, grass, water boots, and a variety of farming tools and seeds to help them recover from the setback.

Flagaman in St Elizabeth is one of the most populated farming communities in Jamaica. The community is, however, often vulnerable to fire outbreaks. On August 16, several farmers in the Flagaman farming community suffered an estimated $3.8 million in losses due to the bush fire. More than 10 hectares of watermelon, cantaloupe, guinea grass mulch and irrigation equipment were destroyed.

St Elizabeth is referred to as the breadbasket. Pearnell Charles Jr, minister of agriculture and fisheries, said the approximately 500 registered farmers in the Flagaman have been contributing significantly to Jamaica's food security. He said that productivity will be enhanced when the area finally gets irrigation supply.

"We want you in Flagaman to get the water so that we can reap more and flourish and not have to deal with the limitations that have constricted you," Charles Jr said.

"Imagine if you get the water what Jamaica will see in production? Right now we are at our highest production, without water. With water, we are moving beyond meeting local demands, providing support for the regional demand and exporting across the world, so that the entire globe can get an opportunity to taste what is good in Jamaica," he added.