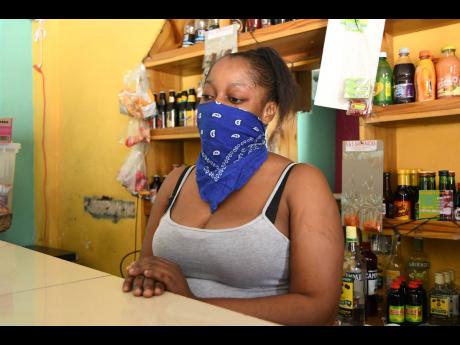 At 7 p.m., the bulk of Susie Whyte's customers would be home from work and would begin pouring into her Diamond HQ bar on Waltham Park Road for a drink.

But at that time yesterday, her establishment was closed to the public due to the new COVID-19 containment measures handed down by the Government on Sunday. Zoos, parks, gyms, attractions and bars should be closed by 6 p.m. daily until March 22. Whyte said her business is suffering.

"This early time for closing affect me really really bad because 6 o'clock is when the customers dem would start come in from work and support me. Yes, there are some people who are everyday customers who will come in the day but the majority usually come after 7 or so," she said. "When the bar used to close at 8, sometimes I would make a $3,000 or $4,000 on a good day, so probably some of these days I may make less or none at all."

Shortly after COVID-19 hit local shores, Prime Minister Andrew Holness had ordered the closure of all bars and nightclubs. They were allowed to reopen with strict guidlines for operation.

Jackie Cobourn, operator of Jackie's Tavern in Bull Bay, said she believes that they are being picked on.

"Mi understand that the virus need to be controlled but locking it at 6 p.m. nah go do anything at all. First thing mi would like to ask 'Bro Gad' is if a after 6 o'clock COVID leggo a Jamaica and if a bar alone it leggo because everywhere else a go up to eight and we a get punished. First dem did lock it fi good and we suffer like dawg. Now dem a make we lock at the time when we suppose to a open. A styling ting," she said. Similar sentiments were echoed by Shelly-Ann Thomas who said her 'bread and butter' has been decreased drastically. Speaking to THE STAR via telephone from her bar in Stony Hill, Thomas said her day's sale was yet to reach $1,000.

"Is two kids mi have and is over 10 years mi in bar business. Mi was a bartender before mi turn bar owner and it provide fi mi and mi two kids but now with dis 6 o'clock ting, nutten nah go gwan. We already a struggle from COVID come in because people a save dem money and now dis," she said.