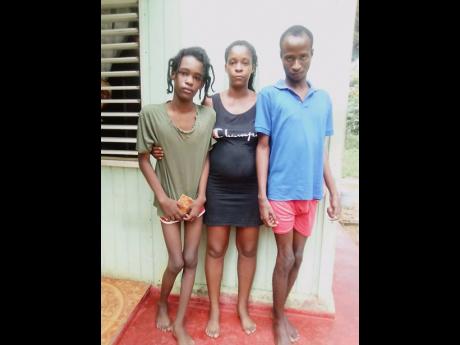 Bernadette Baker and her sons Travelle (left) and Shanaldo.

It has been rather challenging for 42-year-old Bernadette Baker to care for not one but two disabled children. She has been tending to their needs since birth, but it has become a strain for the single mother to absorb the cost of medical bills and afford basic needs.

"I'm suppose to go University Hospital [of the West Indies] every month, but it has been years. When I'm going out I cannot take public transportation, because they don't deal well with strangers. It used to cost me $10,000 for transport, but I can't find it," she told THE STAR.

"They should get medication to keep them calm, because if not they act out, especially the older one; he stamps, bites and push down anybody. He even ended up in the hospital for the same thing because he almost broke his hip, so I would want to try and get them back on their meds before anything else happen."

Her eldest son, Shanaldo Goodwin, 23, was diagnosed with scoliosis and is mentally challenged. Travelle Vanriel, 16, her youngest, is autistic and unable to speak.

"I have to bathe, dress and feed them, especially the bigger one ... I have to do everything for them," she said

Baker said that they both wear diapers, which she is hardly able to afford, worse now that she is unemployed.

"I worked for KFC for 10 years, then a security company. I had to leave my job to take care of my sons because my mom got sick and was bedridden, she couldn't help anymore. I had to take care of her and my boys for a while, but now it's just me," she said "Now that I'm home, I try to help myself by doing some farming, and I used to do a little 'buy and sell'. But the business run down because I had to use back that money to take care of them, buy Pampers, food and clothes."

The Williamsfield, St Elizabeth resident told THE STAR that she use to get help from a friend in a neighbouring community, but he had passed away.

"Sometimes people who know about my situation will give us stuff, but I can't depend on it. ... As for the fathers of the children, they don't help me at all."

"I am a single mother with them from as long as I can remember. It really pains me to know that I'm in this position. Sometimes, especially at nights when they are sleeping, I cry so much. I try to get help wherever I can because that is just a mother instinct, but it is hard for me. They are my children and I just want to give them the best in whichever way I can," Baker said.

If you want to help Bernadette Baker, you may donate funds to her bank account.