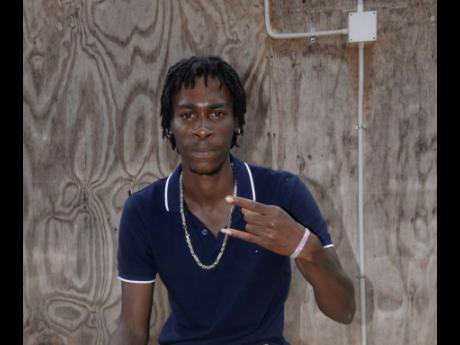 Determined to get a spot on the RJRGLEANER Cross Country Invasion stage, Siloah's up-and-coming artiste Wizzle Genius anxiously flags down THE STAR team to showcase his talent. His brethren are his biggest fans as they 'buss dozens of blanks' to the lyrics of his pre-released single, ' Don't Leave Yuh Girl Round Mi'.

He then shares the inspiration behind the song that he believes will give him his musical breakthrough.

"Yuh know say mi write da song ya off a one a mi friend experience. One a we next friend end up bring him friend round the dawg, but the dawg end up 'capture' her and when yuh hear pon the shout, the girl a end up tell di dawg bare tings, so a just so the song come about," he said between laughter.

The 25-year-old entertainer, who calls the deep rural community in St Elizabeth home, said he spends hours each day honing his craft and is hoping that his lyrics will be heard in places where dancehall music is not common.

Like his friends, some of whom are eyeing a career in the entertainment industry, he stated that he is looking forward to the RJRGLEANER Cross Country Invasion show this Friday, when it rolls into his community.

"Mi love music and every day mi always a listen it. Even when mi a listen to another man tune, mi always a make song on spot off the riddim whe the artiste a deejay pon. Mi woulda really waan reach really far inna music. Mi rate a bagga artiste out deh, but right now a Vybz Kartel di ting deh," he said.

"Mi really hope dem a go call up couple a the young artiste bout the place and mi get a chance to show the world what I can do, because that woulda be one a the biggest ting for me now," he added.