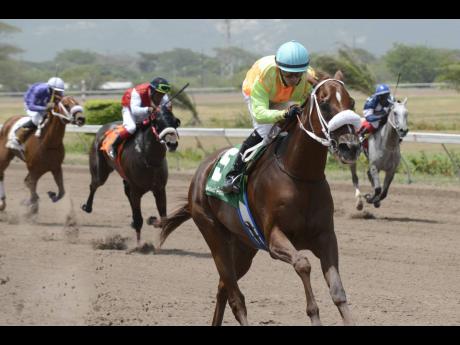 RICHARD Azan's PEKING CRUZ, who last raced in the grade-one Caribbean Sprint in October, a five-month lay-up, makes an interesting return in tomorrow's SVREL Third Anniversary Trophy, facing a formidable bunch, but has trained well and could use a combination of back class and handicaps to floor rivals.

PEKING CRUZ should come in at approximately 50.0 or 50.5 kilos with champion rider Christopher Mamdeen, reporting off a four-day ban for infringements from last season but stayed on appeal until he wrapped up the riders' title.

The six-horse open-allowance line-up is completed by some of the fastest and versatile horses in training - TREVOR'S CHOICE, PATRIARCH, GOD OF LOVE, PRINCE CHARLES and RAS EMANUEL. However, some are allowing PEKING CRUZ, a sharpened grade-one veteran, too much weight to outbattle him if it comes down to a stretch duel.

There are no two ways about it. The race will be a blitzkrieg of speed with TREVOR'S CHOICE and PATRIARCH drawn alongside each other at stalls one and two, respectively. The run-on sprinters, RAS EMANUEL, GOD OF LOVE and PRINCE CHARLES, occupy stalls three to five whereas PEKING CRUZ is widest.

TREVOR'S CHOICE is pretty light with 110lb but won't have the luxury of relaxing on his bridle as he relishes because lightning-fast PATRIARCH, though burdened with 126lb, should be giving him hell on the lead, especially with stablemate GOD OF LOVE waiting in the wings to pounce.

GOD OF LOVE has a decent 117lb and a nippy rider, Oneil Mullings, who, apart from being aboard the four-year-old for his last two runs, has been familiar with the gelding, winning aboard him when he was previously at Philip Feanny's barn.

Going down by only a neck to GOD OF LOVE, at six furlongs in December, PRINCE CHARLES is not to be taken lightly in a race which the pace could come back to the closers. Carrying only 112lb, a kamikaze on the lead could place the race in his lap despite beating moderate WARTIME twice on the trot to complete a double within a month.

PEKING CRUZ' preparations have a sneaky look of a grade-one runner who is back to form. Last Saturday morning he galloped 58.2 from the gate, out the straight, with apprentice Anthony Allen aboard, the first half-mile in 45.4.

Azan has been galloping the five-year-old in a visor which he will wear for the quick dash, a clear indicator that he is coming to fly at the minimum trip with the minimum weight, 16lb lighter than October when he chased MR UNIVERSE and EXHILARATE into the lane in the Caribbean Sprint, afterwards eased in the stretch run by Robert Halledeen.