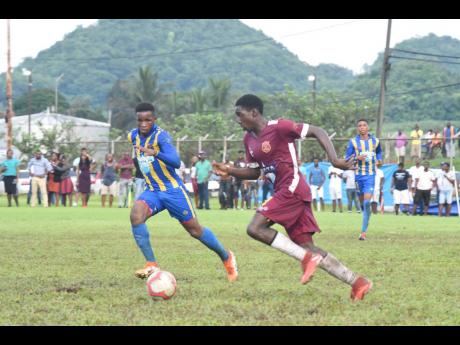 Manchester High School, known in recent years to produce a good team in the past but not managing to get over the line, showed signs of repeating history yesterday when they played out a 0-0 quarter-final scoreline with Maggotty in the ISSA/WATA daCosta Cup at the STETHS Sports Complex in Santa Cruz.

Maggotty, who played a tactical game, sat behind the ball for the entire first half not giving Manchester much chance to create a goal. Maggotty came out of their shell a bit early in the second half trying to get something they could defend but as soon as the visitors started creating chances they became content with getting a point from the game.

Despite a bit disappointed in not getting all three points, Vassell Reynolds, coach of Manchester, said they have to just regroup.

"Despite it was an away game for us and the heat was on for both teams, this was one of the games that we marked for all three points. I don't think we played badly but was just let down by some poor decisions in the final third," Reynolds said.

"I thought the Maggotty team played a tactical game. They sat behind the ball and countered on us that forced us to regroup and defend when we lost possession," he added.

When asked about the psychological effects of stuttering at this stage of the competition, Reynolds admitted it is a factor, however, they are focused on getting a positive result against Cornwall College on Saturday.

"We are not hiding from the fact that it would have been a psychological barrier for them. However, I would have gotten these youngsters to take on the competition one game at a time. Now Maggotty is out of the way and we didn't get the three points, we have to come back on this same venue and tackle Cornwall College. And, hopefully, we can turn up our A-game on Saturday," Reynolds said.

Xavier Hendricks, coach of Maggotty, said they were forced to play a defensive game but did not mind as they knew their strength lies with their goalkeeper Davonnie 'Buffan' Burton.

"Well, we didn't lose so we have to be satisfied with a draw. I think Manchester is a very excellent team in the way they moved the ball and how they played with a lot of space. We had to play tactically to close up the space from the midfield and push them out wide which forced them to go long. And with an excellent goalkeeper all those balls just dumped to him," Hendricks said.