Mr Universe too fast for rivals 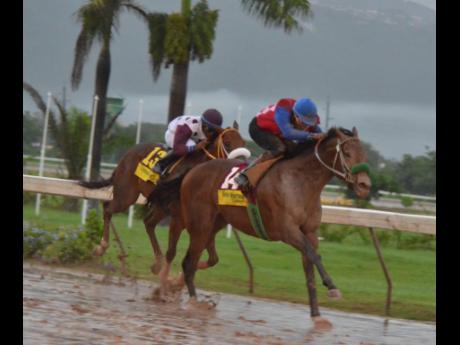 M R UNIVERSE gives up 14lb to United States-bred LEGALITY but is down two groups from grade one, where he was second best last Saturday, beaten at six furlongs by ANOTHER BULLET in the Caribbean Sprint.

Enabled by a system that allows him to return to overnight allowance, having not won a second open allowance race in eight months since beating CAMPESINO last November, MR UNIVERSE, who was also second in last year's Caribbean Sprint, has only one horse to worry about in Saturday's 11th race, Philip Feanny's LEGALITY.

Similar to MR UNIVERSE, who proved last Saturday that he is a crack grade-one sprinter, requiring only one run after an eight-month lay-up, to finish a length and three-quarter behind ANOTHER BULLET, caught inside the last half-furlong, LEGALITY is no overnight allowance horse.

After plundering three races, two restricted and a so-called optional $900,000 claiming event, twice winning at odds of 1-9 then 3-5, LEGALITY faced overnight allowance runners and put in his worst effort in six starts, Feanny deciding to refit him with blinkers for a dash, cutting back from middle distance to six furlongs in the Ahwhofah Sprint.

Having assimilated to middle distance races, a pair of seven and seven-and-a-half furlong races, three of which he won after finishing second to stablemate CUSTER at five furlongs straight on debut, LEGALITY was never better than third in the Ahwhofah and finished fourth behind shock winner ZEPHYR, who led home LOTTERY TICKET and CAPTUREMYSHIP.

Returning this Saturday, four months later, suggesting something apart from the distance could have been a factor in his poor run, LEGALITY does so minus blinkers and working great, taking out GOD OF LOVE, fourth in Saturday's Sprint, in a five-and-a-half furlong workout, clocking 1:06.2, the last five in 59.4, roughly a three-length margin over his stablemate's 1:07.0.

At 112lb and obviously a better horse than the level on his best day, LEGALITY would have been a cinch, on paper, were it not for MR UNIVERSE's class and speed. A horse who doesn't understand what it means to click a half-mile split in anything but under 46.0 seconds, the speedy five-year-old has no humbug deliberately keeping him honest as was EXHILARATE's only job in last week's Sprint.

With Nunes' gang not being able to enjoy a similar get-out-of-jail card, MR UNIVERSE has the lead for himself and will be cruising so fast and far ahead of LEGALITY that Omar Walker should be able to get him home at six furlongs, though his tail normally starts spinning like a propeller after five and a half.

LEGALITY looks sharp at exercise off a four-month lay-up but MR UNIVERSE has the jump on him, two runs under his girth, no matching speed and the trip just within his reach, despite giving up 14lb.