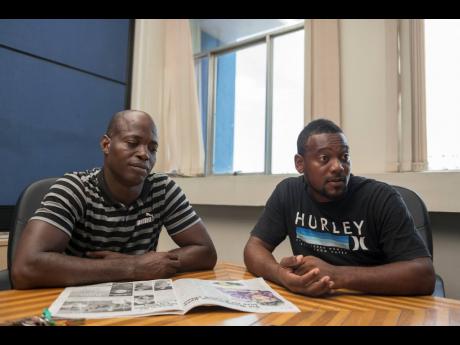 Actor Lacell Parnell, more popularly known as 'Girlie' or 'Mr Handsome', said that he is still haunted by his 2009 conviction for a raft of sexual offences in the United States of America.

Parnell, 51, was found guilty of forcible touching, sexual abuse, endangering the welfare of a child and aggravated harassment in the second degree. He appealed the convictions but was unsuccessful.

In a telephone interview with THE WEEKEND STAR yesterday, Parnell said that he was innocent of the charges, which led to him being listed as a sex offender in the USA and later deported to Jamaica.

"If I was guilty of those charges, I wouldn't be talking to you today. I would have spent years in prison. When I came back to Jamaica, it didn't take me long to obtain a visa and go to England. And when you do that they go and search every corner for information on you," he said.

The charges that were brought against him are based on his conduct towards a 13-year-old boy. The prosecution said that it involved sexual contact, exhibiting to the child a sexually explicit video, and other communications of an explicitly sexual nature.

Parnell's lawyers were unsuccessful in their attempts to get the video evidence thrown out.

The veteran actor said that he was the subject of much ridicule following his deportation to Jamaica.

"I remember a main gospel artiste called me saying there was some rumours and I talked to him about it. After our conversation, he gave me the job and I worked with him for years. I performed around hundreds of children and none of them can say that I said anything or did anything that was suspicious," Parnell said.

The actor said he feels "violated" by the claims that landed him on the list of registered sex offenders in the USA. He said that he is hurt by the fact that people constantly uses it to judge him. He told THE WEEKEND STAR that issues such as attack on children cuts him deeply.

"It feel hurt when you hear a kid is missing or is being hurt or raped. Me, as for one person, know where I am at, so no one can point finger. I don't rape people, I don't molest kids, so I know where I am at any given time, so my name can't be called on those things," he said.