Gunshot victim struggles to fend for himself 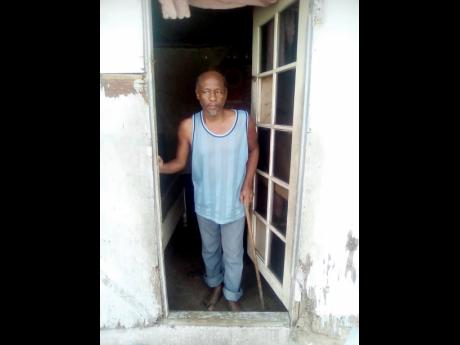 Imagine being partially mobile, faced with constant migraines and not having a place to call home.

This is the current reality for 61-year-old Calvin Matthie, who is desperately in need of a home and assistance to afford basic needs.

"I was living at Lyndhurst Road and them throw me out a street and from that, me just a bounce around until someone see me and me explain to them, and I've been staying with them for a while. But where me a stay right now, a whole heap a people live inside the room and since the other day, dem come give we a notice because is like a capture place," he said.

Matthie, who said that he was a gardener, explained that his woe started a few years ago when he was shot in the head while walking one day. Matthie believes he was a victim in a feud between factions in the community.

"I got a shot in my head and it cripple up me right side. Me hardly can walk. I don't even have balance. When me a walk, me a fall down. One time me use to walk and do little work like clean up people yard, but nobody nuh want take me on again because me can't do the work good because of me sickness," he said. "It get worse yah now, me just a scramble on a stick."

Matthie, who now resides on Little Kew Road, Kingston 5, said that he has no family support and he is left to fend for himself.

"Is like me nuh have a family, me just out here pon me own. Me have two cousin that use to reach out one time, but them say them do enough and cyah bother no more. Me two girls them, me nuh know wah dem a deal wid. A big people them but them can't help me because them have fi them own problem and children so them nuh look my way," he said.

He said sometimes a Good Samaritan might bring him food but that is not constant.

"Bwoy, sometime all days me nuh eat but me just gwan jam until something come along. This time me get little food and a next time nothing," he told THE STAR. "People just try to help me more while but you know after a while them cyah go no more."

However, the elder is more anxious to have a shelter over his head.

"Me use to going without food, so most days me nuh worry about that. A just somewhere to live is my problem because it nuh nice to be homeless. Getting somewhere to live would mean the world to me right now because when me have a roof over me head me mind will be at ease," he said