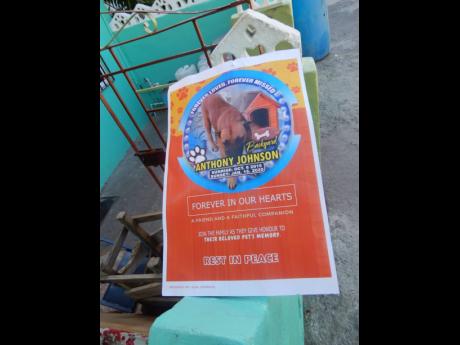 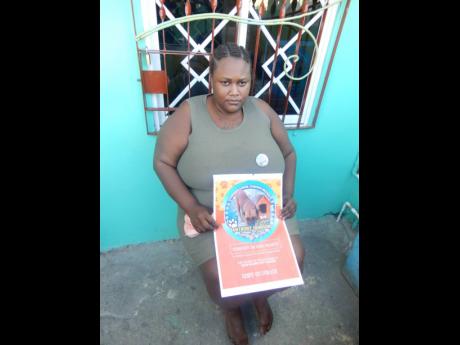 Camiesha Fletcher holds a photo of her beloved dog Backyard. 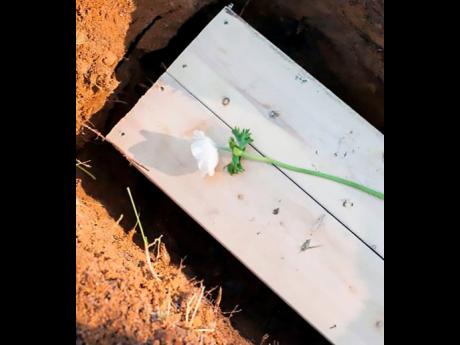 Backyard's coffin is placed in the grave.
1
2
3

Camiesha 'Cam Cam' Fletcher's eyes well up with tears as she remembers her dog, Anthony Johnson, who she and other family members buried on Sunday at the family's plot in Bellfield, St Catherine.

Johnson, popularly known as 'Backyard', was given a fine farewell, as, according to Fletcher, his funeral and nine-night cost approximately $50,000.

"Mi did need fi do supm for him because people did love him. Him never bite nobody and him always a follow me. Even the other day mi deh a one dance a Rema and him di deh same way. Everybody a tek picture side a dem. Him did love the spotlight," Fletcher said. There was a big celebration for the life of Backyard at last Saturday's nine-night.

"About 12 people come a the funeral because we had to transport him to the family plot, but a nuff people did deh a the nine-night. Wi did have liquor, food, bread and fish and soup," she said.

The funeral was an emotional one according to some family members who attended. Fletcher's mother even delivered a 'sermon'. Fletcher admitted that Backyard was not her first dog.

"I got Backyard in 2015, so he would have celebrated his fifth birthday this year. I don't have a problem getting another dog but there will never be another one like Backyard," she said.

Backyard was born in Denham Town, West Kingston. He was given to Fletcher by her stepfather and he quickly became a part of the family.

He got the name Anthony Johnson from her cousin, who shares that last name. He was nicknamed 'Backyard' because that was where he spent his first few years as a puppy before he was old enough to venture to the front of the house. Fletcher said that he was also loved by other members of the community.

The Race Course block 'protector' as he was described, loved children and was often seen playing with them at the front of his house. He was found by one of his playmates last Wednesday.

"Him friend come and tell mi seh dem find him a the gully dead. Mi did have him round a back inna mi old fridge with ice pan him so mi could preserve his body for the funeral Sunday," Fletcher said. She said that based on her 'autopsy', Backyard may have been poisoned.