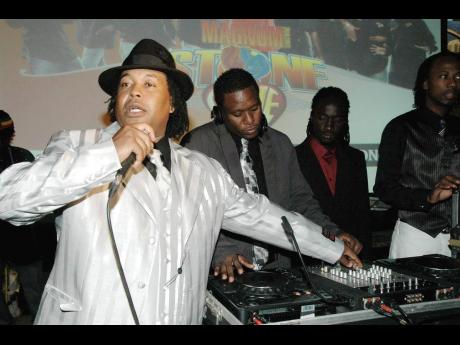 Six months after being held at gunpoint and being robbed of his vehicle, his laptop, two cell phones and his treasured box of KFC chicken, and then being out of work because of the pandemic, Stone Love selector Geefus is still holding the faith.

The always merry Geefus told THE WEEKEND STAR that it was a sobering moment when he came face to face with the gunman, forcing him to shout, "Yow, yow, yow! Don't shoot!"

But Geefus was not keen on dwelling on that troubling incident which he described as "a different feeling totally, especially since it took place while I was entering my driveway".

He was more focused on his message to persons in the music industry, imploring them to observe all the COVID-19 protocols.

"Me is a man who don't leave my house just so, and when I do, I always have three masks with me. I have a kerchief around my neck, I have my Stone Love mask, and I have a surgical one.

In these times we have to be very careful and do the things that the Government says so that we can flatten the curve as dem always a talk bout. We don't want to hear 'bout any more deaths in the industry from this virus," the popular selector said.

Geefus, known for upping the excitement ante at any session, explained that although several events were held when the entertainment sector briefly reopened, he and his team were not present at any, except the weekly Weddy Wednesdays.

"At Stone Love, we run our thing professional, so permits and those things have to be in place and everything correct for us to be marked present. So really and truly, is a long time I haven't worked. And with the spike, no entertainment thing cyan go on for now because, as we all know, it is very difficult to practise social distancing at these events. Right now we just haffi chill and tighten we belt even more than how it tight already," he said.

Geefus stressed that things were rough for the many persons in the business, especially those who did not have the foresight to put away a little savings for a rainy day. He sent thanks to fans, friends and family overseas who have been assisting.

"Things hard over foreign to yuh nuh. So when a man call and say 'Geefus mi a send yuh a ting', yuh have to be grateful and thankful. Right now me just a pinch things and try pay some bills and provide some food pon the table, with the help of the Father. Cause right now me don't want to haffi go to my boss, cause him have his ting fi deal with too," he said.