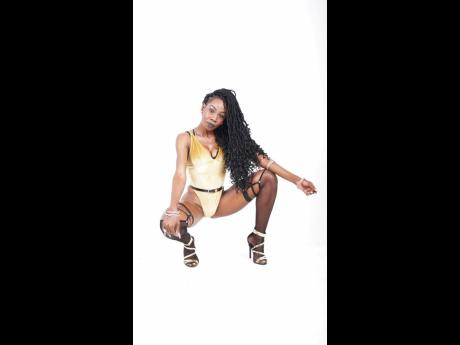 Dancer Queen Latesha shows the public what 'hottitude dancehall' is all about with her new Hot Sauce challenge.

The challenge came about based on a collaborative effort with her and recording artiste Sayonne, who is featured on the track Hot Sauce.

Queen Latesha told Dancers' Paradise, "I've been working with the artiste Eazi Money from New York for a few years now. I did a music video production for him in Jamaica and recently did a Instagram competition for his song Dancer, and he reached out to me to do the Hot Sauce challenge for Sayonne, who is a part of his music team. She contacted me and I organised the concept of doing the choreography for her challenge to engage her fan base."

"They say I have a certain 'hottitude' when I'm performing. Persons are captivated by the way I dance. I'm always in my heels and I'm confident and seductive. So I try to push my concept for females who want to show that sexy side," she said. The former dancehall queen took two days to do the choreography before sending it to Sayonne who readily approved it.

Since its release, a few dancers have risen to the occasion, accepting the hot sauce challenge. It helps that there is a cash incentive involved for the winner.

So far, Queen Latesha has been receiving mixed reviews from the hot sauce challenge.

"Some persons love it. And I see that the contestants are really having fun. Some are intimated to submit and think they can't compete with the way I dance. Some think that the routine should be more simple and they are worried about how they might look doing it," she said. "And then there are others who aren't fond of certain challenges. They would much rather enter for fun, so we plan to extend after the end of the final date to get persons who would like to do the choreography without competing or being judged."