Had to fight my babyfather for child support 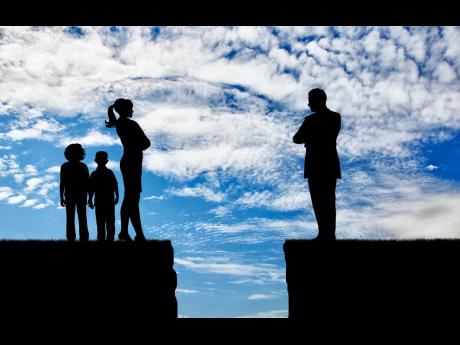 I am 23 years old and I have two children. My second son's father and I were together for four years. We are separated now because honestly speaking, he can be nice but he is very disrespectful and abusive. He is 24. All I ever did was love him. Even his mother told me to get rid of the pregnancy because I didn't know what I was getting myself into.

He was always running me out of the house because of other women and then he would take me back when the relationship with these women didn't work.

When I was about seven to eight months pregnant, he ran me out of the house with my big belly. I didn't do anything wrong to him to cause him to do that to me. I bore the abuse and pain. I knew where I was coming from to get to where I am in life. I regret everything. But I love my son. He is adorable and sweet. This is like writing a book, but I am cutting it short. After I had my baby, I decided to stand up for my rights and I gave him a dose of his own medicine and everybody had a problem with that. He received over $80,000 for his partner draw and my son didn't even get a tin of feeding out of it. Then he told me that his daughter's mother got $15,000 out of the money and his father got the rest of it. For what reason, I don't know.

Whenever I have money, he always wants to know what I did with it. I went to his house because he owed me some money and he beat me. But he ended up paying me because he couldn't really manage me and I was not backing down. During the altercation, his television fell. He ran outside for a piece of iron and I told him the amount of money he has for child support because he wasn't doing anything for my son. I took $9,300 and he walked and told everybody that I took $23,000. I checked the money in front of people as witnesses.

The grandmother says she is a Christian and she accused me of tying her grandchild. I heard the argument and I cursed her because as a grandmother, she should be the one to tell him to support the baby. I have no reason to tie anybody and my hands are clean from these things.

Try your very best to keep out of trouble. You have tried to have a good relationship with this man because you loved him. But he has not shown you love.

He is not willing to settle down with you. The intimate relationship did not work. He is not even willing to support his child, but you should insist that he does. You may have to take him to court for child support and let him pay the money through the court. He is a wicked young man. There are those who may say that you should not take him to court but that might be the only way you can get justice. Try your best to not get into any more physical fights with him. He may physically hurt you as he tried with the piece of iron.

You are still young. I beg you, try and go back to school. Work towards a career. Get yourself a skill. Do not allow men to use you and get you pregnant. You have made mistakes, but you can bounce back. This man may regret what he did to you. But don't take him back into your life. Put God in your life. I will be praying for you.