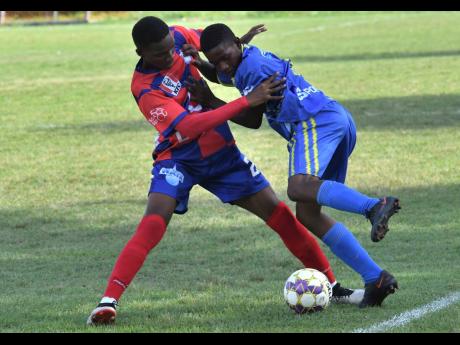 Ricardo Spencer (left) of Camperdown and Okeeno Stephenson of Papine fight for possession of the ball in their ISSA/Digicel Manning Cup schoolboy football match at the Alpha Institute last Friday. The match ended 0-0.

Lofters believes they have completed their most difficult stretch in the competition with Camperdown yet to register a win, after defeats to Group C contenders Wolmer's Boys' School and Mona High, the latter by a resounding 9-2 on Tuesday.

They also had to refocus after a moment of indiscipline during last Friday's encounter against Papine High, led to three of their players getting red cards. Lofters admits a change in attitude has sparked his optimism about getting out of their slump.

"It's just the mood of the camp. I spent Monday in training trying to build them up from that and giving them hope. It was a hard task but we are sticking to it. What we did was get consultation and it is a holistic approach. So we did a lot of counselling sessions. I saw the attitude change (on Tuesday) so we are on the up," Lofters said.

The improvement may have not reflected on the scoreline but Lofters said playing Mona and Wolmer's, two of the top contenders in the group away could be a blessing in disguise, knowing that they now have the chance to take advantage of crucial points in their bid to advance to the second round.

"This (Mona game) is behind us. We have seven games to go and 21 points to win. We cannot dwell on what has happened. It is up to me to get them up for (today), see if we can get some points (today) and on Tuesday (against Hydel)," Lofters said.