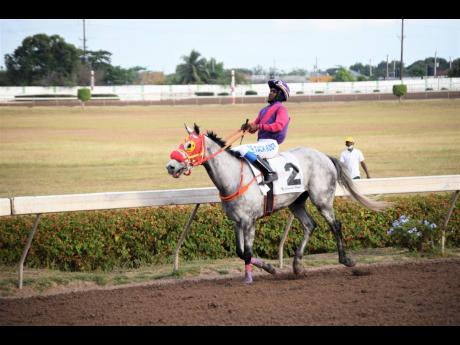 DRAW a thick line through ROY ROGERS run last week Saturday, taken out shortly after the start by ANOTHER BULLET, who forced him down on NEVADA, effectively ending his race in the five-and-a-half furlong event won by DUKE.

Well, guess who wouldn't have any of that? Dick Cardenas, of course. The ever-wary-in-tight-spaces Panamanian gathered ROY ROGERS and started angling the grey wide of runners approaching the half-mile, which was really a blessing in disguise because PRIMAL FEAR went down leaving the three, causing the fall of NEVADA and UNCLE VERNON.

Cardenas had already charted his course, well wide of the field, long before the spill along the rail, which allowed him to avoid the pile-up. Even so, ROY ROGERS, who turned for home well behind DRUMMER BOY, clawed his way back into the race under minimal urging, finishing three and a quarter lengths behind the second-place horse, LOOSE BALL.

Returning quickly at a mile in division one of Tuesday's Errol 'Big Sub' Subratie Memorial, running nine pounds lighter with claiming jockey Nicholas Hibbert, ROY ROGERS gets the easier leg of the divided event, avoiding the likes of LURE OF LUCY, EXCESSIVE FORCE and SUPERLUMINAL.

At 112lb and drawn against rail, ROY ROGERS, one of the most determined horses in training, should enjoy every step of the trip. Running lighter than when he chased home MONEY MONSTER at nine and 25 and SENTIENT at seven and a half, it's hard not to give Dennis Lee's grey the thumbs up.

Remember, this is the same horse who placed fourth in July's King's Plate, beaten three and a quarter lengths at seven and a half furlongs by KING ARTHUR.

Division two isn't all that complicated either, considering the form of imported LURE OF LUCY. Unbeaten in two starts since returning off a six-month lay-up, the three-year-old foreigner is undoubtedly quick but had lost at seven furlongs to stablemate EAGLE ONE in March.

However, it appears that she is back to her best, back-to-back sprint victories in really fast times, 1:06.3 and 1:12.3, for five and a half and six furlongs, respectively. Carrying 121lb on last and holding off SECRET IDENTITY, who was really light at 110, suggests LURE OF LUCY will be bulletproof on the lead with 112lb.

SUPERLUMINAL and EXCESSIVE FORCE, in at 126 and 121lb, respectively, will have to produce A+ games to defy the handicaps.