‘Johnny’ Nugent could be back in the saddle soon 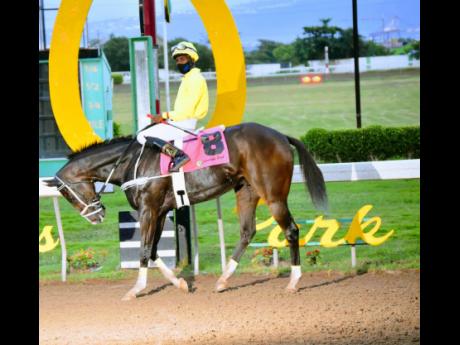 TREVOR’S CHOICE with Oshane Nugent aboard heads to the winners enclosure after winning the Christopher ‘Chris’ Armond Sprint Trophy, the 11th race at Caymanas Park on Sunday, December 27, 2020.

Lerone Lee, agent of top apprentice Oshane 'Johnny' Nugent, says that he is expecting his charge to return to the saddle a much fitter and better jockey next month.

Nugent has been out of the saddle since February 11 after suffering a number of injuries when he was taking a three-year-old that is yet to race through its paces when the animal ran into the track railing with the jockey aboard, throwing him from the saddle.

He was taken to the Spanish Town Hospital where he was kept overnight and released the following day. Lee told STAR Sports that the 2020 champion apprentice is taking all the necessary precautions to ensure that he is fully fit on his return to the saddle.

"He had suffered a concussion but he has passed all of the protocols, including the CAT scan, and physically he is getting his body together, and so in the month of April, he will be working on that and he is looking forward to resume riding in May," said Lee.

"This is a setback for him, but every disappointment is for a reason, and so the good thing about Nugent is that he is taking his time, and he is in no rush because he knows the severity of the incident and he wants to take all the precautions to ensure that his career will last," Lee said.

The veteran agent underscored that Nugent has suffered a lot financially from not being able to ride for all almost three months.

"He has been losing income, but like he said before, it is health over wealth, and that is what he is practising, and he is making sure that he is healthy and ready to resume riding over anything else," Lee said.

"I think that he has to get back rides to get his confidence because it is natural for someone to be involved in an accident and to be down for a minute, and so that it just a part of the game. I think that once he is getting the good rides then his confidence will be right back," he said.

At the time of the fall, Nugent, who began riding in December 2019, was leading the jockeys' championships with 13 wins, two ahead of last year's joint champion jockey, Anthony Thomas. He has so far recorded 49 wins in his career.