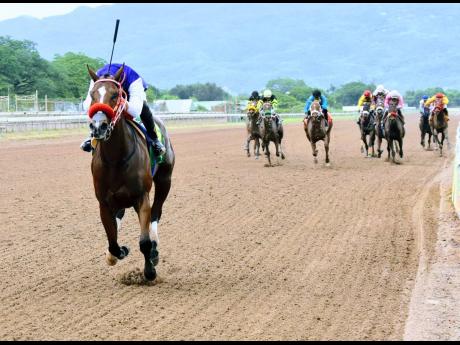 ENGLAND'S ROSE and EROY, two of the most expensive horses to follow for the last month, square off in Saturday's sprint, aiming for redemption against non-winners of an overnight allowance.

Speed-shy ENGLAND'S ROSE destroys rivals if allowed to dominate but wilts under pressure. Though a fearsome speedster, ENGLAND'S ROSE, lacks the heart of big sister SHE'S A MANEATER, placing third behind UNIVERSAL BOSS and CAPTUREMYSHIP at five furlongs straight on last.

EROY has also had his share of issues, going off as favourite for three of his last four starts after ripping the exercise track in preparations. Out for the third consecutive Saturday, EROY obviously has no physical ailment but has been flattening in the stretch run of middle-distance races.

ENGLAND'S ROSE should get the jump on EROY at the start but might not be able to escape the foreigner with Omar Walker, who observes no stoplight down the backstretch.

EROY, similar to ENGLAND'S ROSE, might have been cut down to size among overnight allowance runners but has been keeping better company than the local-bred, whose victim was ALEXA'S LODGE when she last won.

Stepping up to open allowance for his last race, EROY turned for home four lengths off the lead , behind MAHOGANY, last Saturday. Though he has topweight, he could shoot around from his wide draw to nag ENGLAND'S ROSE on the lead.

Not fond of company out front, and already heavy with 122lb, the filly should have a hard time shaking off EROY inside the final furlong. EROY might have built his reputation out of the mile chute but did run a strong third with topweight against SIR ALTON's 1:11.1 for six furlongs in September.