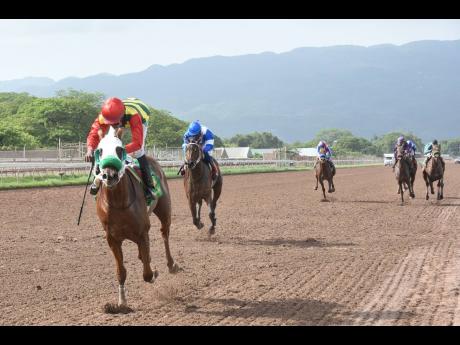 File Toona Ciliata made light work of his opponents to claim the seventh race ahead of Wow Wow and Supreme Soul on August 29, 2020.

TOONA CILIATA's abysmal fifth-place finish behind SENTIENT in the Chairman's Trophy is best forgotten on Saturday when he climbs into the ring for the Viceroy trophy at a mile, flashing his alibi of not having topweight 130lb.

In one of the weirdest races run all year, TOONA CILIATA's Triple Crown-winning but void-of-pace stablemate, SUPREME SOUL, reported in the visor for the seven-furlong Chairman's Trophy and set off in front of a seven-horse field, four of whom were his stablemates, including TOONA CILIATA.

PRINCE CHARLES decked O'brien White at the start and another of SUPREME SOUL's stablemates, UNIVERSAL BOSS, chased the unlikely leader whereas TOONA CILIATA laboured in third, ahead of SENTIENT.

SUPREME SOUL tried stealing home at odds of 11-1 but was caught by 2-1 chance, SENTIENT, whereas TOONA CILIATA, the 1-2 favourite, finished fifth behind ACTION RUN and UNIVERSAL BOSS, possibly his worst performance ever.

Reporting with 126lb for the Viceroy Trophy, TOONA CILIATA galloped 59.0 for five furlongs round on October 12 and is roundly expected to set the record straight.

Regarded as the top handicapper in the land, TOONA CILIATA fell victim to handicapping by distance, conditions which dictated that he carried 130lb in the Chairman's Trophy, an 'open allowance/graded stakes', due to the trip being under a mile.

Returns on a high

The cast has changed somewhat with Wayne DaCosta's pair of foreigners, SUMMER SUN and speedster SIR ALTON, joining the fray. SENTIENT returns on a high, having beaten the entire field in three separate races to complete a hat-trick.

However, facing this line-up in which tactics will differ, SENTIENT's bid for a four-timer is a tough ask. SIR ALTON might have returned too quickly, six days, when going for a fourth win on last, caught by SENTIENT at six furlongs after being dragged by GOD OF LOVE.

SIR ALTON has 110lb and will either try slipping the field or setting up a closing race for SUMMER SUN. SENTIENT will be drawn into action early, a pace which will include TOONA CILIATA stalking with the best proven class in the field.

At his best, TOONA CILIATA is a top miler, even with 126lb, and should stamp his class coming off the home turn, packing too much firepower for old rival SENTIENT and up-in-class SIR ALTON.