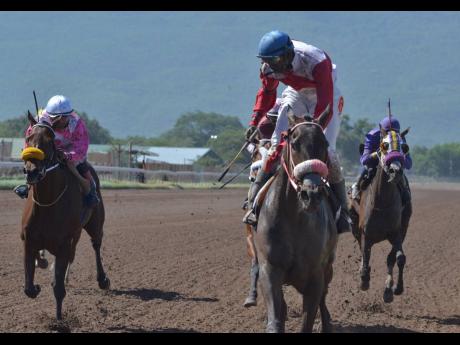 UNCLE FRANK gets the perfect trip, eight and a half furlongs, and an assured pace, which should collapse into Philip Parchment's lap in the stretch run on Friday.

A hard-knocking six-year-old, who needs the perfect race to charge at tiring rivals, UNCLE FRANK, despite topweight 1216lb, is the strongest closer in the 14-horse field and has a barrage of pacers - ROY ROGERS, SUPERLUMINAL, GRAYDON, JAMAI RAJA, MASTER OF HALL, UNCLE VINNIE and ATLANTIC BLUE - to set him up.

SUPERLUMINAL tried slipping a Wayne DaCosta posse, going a mile, on September 27 but was caught by UNCLE FRANK and SUMMER SUN a half-furlong out. At eight years old, SUPERLUMINAL appears to have lost some of his edge as he approaches his ninth year, making the extra half-furlong that much tougher with topweight 126lb.

ROY ROGERS is as pesky as they come and never backs down from a fight. Joined by other speedsters, who know no other way to run, a hot four and a half furlongs to the half-mile marker, from out of the nine-furlong chute, will leave many begging for oxygen tanks swinging into the lane.

UNCLE FRANK should have no problems stalking the speedsters in what could possibly be his easiest race since the COVID-19 break. Having ventured in excess of seven furlongs on only three occasions since, UNCLE FRANK ran creditably in each race.

He was beaten four lengths behind RACE CAR and SENTIENT, going seven and a half, on August 6. Going nine furlongs and 25 yards on September 6, he played second fiddle to stablemate SUMMER SUN, who placed second to SENTIENT.

SUPERLUMINAL had tried matching strides with SENTIENT and placed third, relegated by SUMMER SUN. However, when he returned as the 9-5 favourite, at a mile, three weeks later, both SUMMER SUN and UNCLE FRANK were able to wear him down, his ageing legs exposed by attacks from ATLANTIC BLUE and JAMAI RAJA down the backstretch.

UNCLE FRANK was only beaten by four lengths behind the 58.2 winner, clocking 59.1, the same time he posted when prepping five days earlier, a performance that spells C-O-N-S-I-S-T-E-N-C-Y for the distance runner.