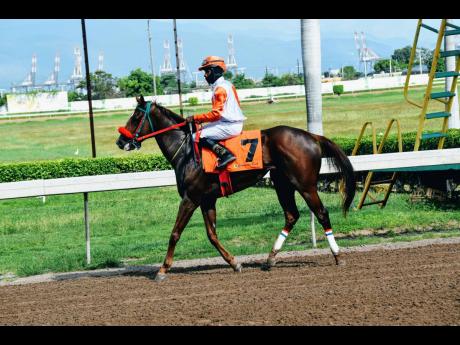 Top apprentice jockey Oshane Nugent has filed an appeal to the Jamaica Racing Commission (JRC) to have his 14-day race ban overturned after he was slapped with the sanction by the stewards at Caymanas Park last week.

Nugent, who rode PRIMAL FEAR in the fifth race on Sunday September 27, was also fined $20,000 for intimidation and interference caused to COLOUR ME TAN, NO MAS, SMOKE HAZE, PERSISTENT ONE and GORGEOUS GIFT leaving the 800-metre point. PRIMAL FEAR went on to win the race but was disqualified by the stewards. .

Nugent told STAR Sports that he filed the appeal because he believes the ruling was cruel and unfair.

"It was definitely harsh, because I don't know why they (the stewards) came down so hard on me, and that is the reason why I have decided to appeal to it," Nugent said.

"I think that they should reduce this ban because this is the first time that I have ever been in front of the stewards from I have been riding, and so I don't know why they came down so hard on me. But they have the handle, so I am just waiting for the hearing to come," he said.

However, when contacted yesterday, Clovis Metcalfe, chairman of the JRC, said no date has been set for the hearing, but as a part of the appeal that Nugent has filed, he will be allowed to ride until it is heard.

Nugent, who began riding in December of last year, has won 23 races so far in his career.

He underscored that a long suspension like this will certainly affect his career in a negative way.

"I think if they are giving me a suspension it should be about three or four race days, because I have been doing well since I began riding in December last year," Nugent stated.

"I think a long suspension like this will definitely be a major setback for me right now," he said.