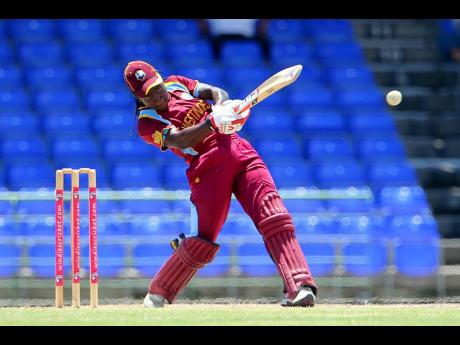 Deandra Dottin struck a high-class half-century and her first since her return from injury, but West Indies Women lacked the firepower in a difficult run chase and went down by 47 runs to England Women yesterday.

I pursuit of 164 at the County Ground here in the opening Twenty20 International of the five-match series, West Indies were always behind the required run rate following a slow start and declined to 116 for six off their 20 overs.

The 29-year-old Dottin stood out, however, the only batsman to reach double figures, with an attractive 69 off 59 deliveries, to post her 10th half-century in T20s and second against England.

She emerged from a slow start to strike six fours and two sixes but lacked support as wickets tumbled around her, with seamer Natalie Sciver (2-16) and left-arm spinner Sophie Ecclestone (2-19) hurting the innings with two wickets apiece.

"It was not one of the best [performances]. We didn't adapt well to the pitch," captain Stafanie Taylor lamented afterwards.

The hosts had earlier piled up 163 for eight after opting to bat first with Player-of-the-Match Tammy Beaumont lashing 62 from 49 balls at the top of the order and captain Heather Knight chipping in with 25 and Amy Jones, 24.

England seemed on course for a massive score when they raced to 109 for two after 13 overs, but West Indies bowlers were sharper at the back end and snatched five wickets for 31 runs inside the last five overs.

Beaumont provided the early fireworks, pummelling nine fours and a six to inspire a 43-run opening stand with Danielle Wyatt (17) and a 52-run third-wicket partnership with Knight.

Taylor claimed Wyatt and Sciver (7) with her off-spin before fast bowler Shakera Selman, the best bowler with three for 26, removed Knight to a catch at the wicket in the 14th over and Beaumont in the 16th, caught at short third man attempting a reverse sweep.

Off-spinner Hayley Matthews (2-25) then snatched her two wickets at the death to ensure that England found momentum hard to come by.

A LITTLE TOO LATE

In reply, West Indies started slowly but also lost Matthews when she chipped a simple catch to mid on off Sciver in the third over with nine on the board.

And the tourists suffered a huge blow in the seventh over when Taylor (8) played back to 21-year-old leg-spinner Sarah Glenn and had her leg stump pegged back at 28 for two.

Dottin set about rescuing the innings, putting on 33 for the third wicket with Lee-Ann Kirby (7) and a further 36 for the fourth with Shemaine Campbelle (9).

Both partnerships were slow, however, and by the time Kirby was run out at the end of the 11th over in a farcical mix up with Dottin, the required run rate had risen to nearly 13 per over.