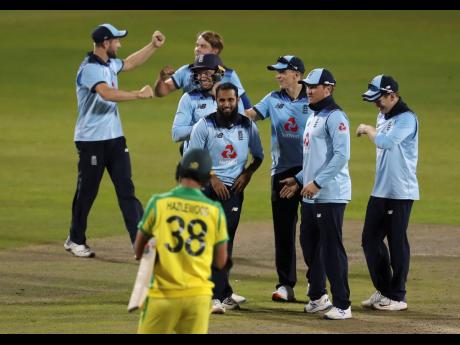 Australia batted themselves into a winning position before dramatically collapsing on Sunday, as England won the second one-day international (ODI) by 24 runs to stay alive in the series.

England's decision to bat first at Old Trafford had appeared to backfire with the world champions limited to 231-9 and Australia reaching 143-2 with 20 overs left.

Australia were making the run chase look easy, thanks to a 107-run stand for the third wicket between captain Aaron Finch (73) and Marnus Labuschagne (48). But the tourists then collapsed to 147-6, and 166-8, in Manchester before finishing 207 all out in 48.4 overs.

A trio of England pacers did the damage: Chris Woakes (3-32), Jofra Archer (3-34) and Sam Curran 3-35. In what has become an unwanted tour tradition for Australia, Archer again claimed opener David Warner (6).

Earlier, England's explosive opener Jason Roy (21) was run out while attempting a quick single from the non-batting end after impressive fielding from Marcus Stoinis.

No England batsman reached 50, with ODI captain Eoin Morgan (42) and Test captain Joe Root (39) the top-scorers. Both men were dismissed by leg-spinner Adam Zampa, who finished with 3-36 off 10 overs.

Morgan was dismissed leg before wicket after Finch opted to review the original not out decision, leaving England on 117-5 in the 29th over.

No. 9 Tom Curran (37) and No. 10 Adil Rashid, who hit an undefeated 35 off 26 deliveries, came to England's rescue at the end of the innings, sharing 76 for the ninth wicket in what would prove to be decisive runs.

Australia were looking to wrap up a series victory after beating England by 19 runs in the first ODI on Friday, also in Manchester.

The third and final ODI is at the same venue on Wednesday, as England try to avoid their first one-day home series defeat since 2015.