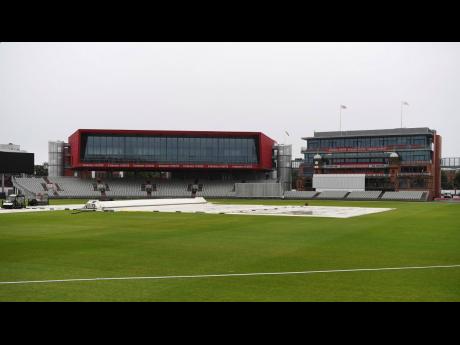 A general view of the covers and out-field as the start of play is delayed due to rain, during day one of a West Indies Warm Up match at Old Trafford in Manchester, England, yesterday ahead of their upcoming three-match Test series against the hosts. 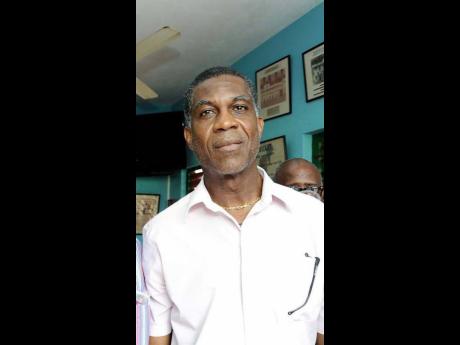 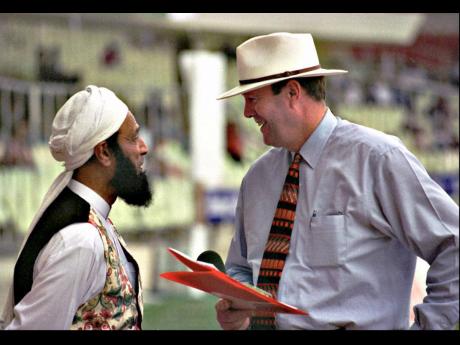 Greig's comments were ahead of a five-match Test series in the United Kingdom in 1976.

"I like to think that people are building these West Indians up, because I'm not really sure they're as good as everyone thinks they are. I think people tend to forget it wasn't that long ago they were beaten 5-1 by the Australians and only just managed to keep their heads above water against the Indians just a short time ago as well.

"Sure, they've got a couple of fast bowlers, but really I don't think we're going to run into anything more sensational than Thomson and Lillee (Australian cricketers Jeffrey Thomson and Dennis Lillee) and so really I'm not all that worried about them. You must remember that the West Indians, these guys, if they get on top are magnificent cricketers. But if they're down, they grovel, and I intend, with the help of Closey (England player Dennis Close) and a few others, to make them grovel," Greig said in a television interview on June 1, 1976, a day before the start of the first Test at Trent Bridge.

Many players on the Windies team said they felt insulted that Greig, born in South Africa during the time of apartheid, would say 'grovel' regarding a team of descendants of enslaved people.

Greig's words only served to motivate the Windies players, who were so spurred on, they won the series 5-0, which led to Holding coming up with the phrase 'blackwash,' as opposed to a 'whitewash,' used to describe such a comprehensive victory.

Now, Holding says Greig's words were unfortunate, but he did not believe he was trying to insult the Windies team.

"That was just an unfortunate situation with Greig being a South African, choosing the wrong word which had serious connotations. I don't think he was consciously trying to be insulting. But we used it to motivate us nonetheless," Holding told STAR Sports.

Greig was jeered for his controversial words by Windies fans at the matches throughout the series, but took it in stride, and showed some sense of humour. In the final Test at The Oval, in London, Greig got on his hands and knees and crawled across the outfield in mock humiliation because of the outcome.

The current Windies team faces hosts England in a three-Test series starting on July 8 in what is considered a biosecure environment as the players will have no interaction with the outside world, because of the COVID-19 pandemic. Captain Jason Holder said that the team will try to use the Black Lives Matter movement to motivate it for victory against England, a move which may stir up emotions similar to those from decades ago in a rivalry based on past tensions because of race and colonialism.

The players will also now be wearing a Black Lives Matter logo on the collars of their new jerseys by British kit maker Castore, in an act of solidarity with protests against racial oppression.