How Germany completed Bundesliga amid the coronavirus 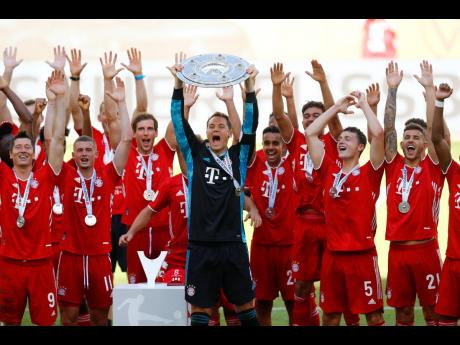 There was a trophy, there were medals and there were commemorative T-shirts. Only the fans were missing as Bayern Munich celebrated their title Saturday and the Bundesliga breathed a sigh of relief. The restart plan worked.

When the Bundesliga restarted on May 16, it was more than a month ahead of other major European leagues. The June 27 finish leaves Bayern Munich and Leipzig with weeks of free time before the Champions League returns in August.

The Bundesliga's virus testing and medical protocols formed a blueprint for other leagues and sports around the world. Unlike most other European countries, Germany also restarted the women's league, won by Wolfsburg.

The games were eerie as players' shouts echoed off empty concrete terraces and the colourful fan displays were gone. Borussia Dortmund set the tone on the first day back when their players lined up to salute the empty 'Yellow Wall', usually one of Europe's loudest and best-known fan section.

The results were much like any other recent season. Bayern recovered from early-season troubles to win their eighth straight title with two games to spare, then held a muted party in private without players' families and the usual beer-throwing antics. Dortmund fought hard with an exciting young team, but fell short.

The coronavirus brought pain to some players, at least indirectly. Injuries were more common after the long break from training and second-division club Dynamo Dresden had to play eight games in 22 days after positive coronavirus tests delayed their return to action.

"Do you think that anyone in the league spent a single second thinking about what's going on in our heads?" Dresden player Chris Lowe said in a tearful, expletive-filled televised interview railing against the German league last week.

Now Bayern and Leipzig face weeks without games before the Champions League resumes in August, though Bayern still has a cup final on July 4 against Bayer Leverkusen. There is also a two-leg promotion-relegation play-off that has yet to be played.