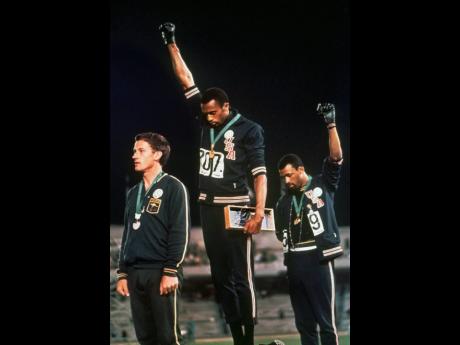 In this file photo from October 1968, United States athletes Tommie Smith (center) and John Carlos (right) stare downward while extending gloved hands skyward during the playing of the American national anthem after Smith received the gold, and Carlos the bronze medal, for the men’s 200m sprint at the Summer Olympic Games in Mexico City, Mexico. Australian silver medalist Peter Norman is at left. The Americans were using their international platform to protest for black civil rights back home.

Jamaica Olympic Association (JOA) president, Christopher Samuda, says while the association supports a change of the International Olympic Committee's (IOC) Rule 50, which bans protests at the Games, it wants it to go further.

Samuda said the JOA wants to see stakeholders organise forums, discuss issues, and implement lasting solutions for serious concerns, especially racial inequality and discrimination, and to see fundamental changes made for the future.

Recently, American two-time Olympic triple jump champion Christian Taylor called for a change to the wording of the IOC's rule 50, which has been the subject of much debate in recent weeks.

The rule prohibits athletes from engaging in any kind of demonstration or political, religious or racial propaganda in any Olympic sites, venues or other areas. Samuda says that this rule needs to be revisited.

"Clearly the rule has to be re-established and we would support a changing of the rule," he said. "The Jamaica Olympic Association embraces the right to protest.

"Of course, we have a no-tolerance policy on racial discrimination and inequality.

Go beyond the protest

"But we should go beyond the protest now and look at institutionalising certain forums, particularly at these Games where issues are discussed robustly, openly and we look for solutions.

"We don't want 50 years from now we are simply protesting."

Samuda said that to look for solutions, the organisers of the games must set up commissions and think strategically to correct these issues.

However, he is optimistic that based on current affairs relating to racism and discrimination, he foresees positive changes down the road.

"This time, I think we will achieve when people sit around the table and discuss the issues in respect of an agenda that is absolutely clear and pointed, so we can come up with solutions to address fundamental problems," he said.

"That is why we give it our support. Any reasonable or well thinking person will admit these issues have to be addressed.

"But in addressing the matter, we have to make sure we address it once and for all, as best as we can, and that we are able to preserve the ethos and spirit of the Olympics, on which the athletes depend in order for careers, and their own financial well being.

"So the JOA thinks the rule should be changed in order to accommodate the right to protest in a very structured way," he said.