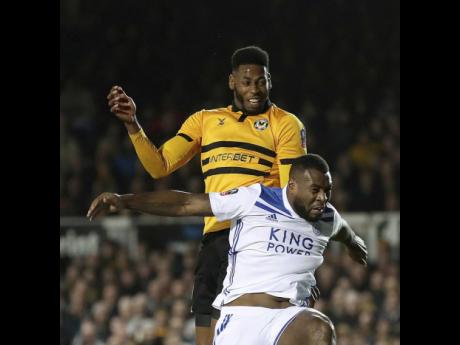 Jamaican striker Jamille Matt has ended his two-year spell at English League Two outfit Newport County after the club said its finances had taken a big hit from the coronavirus pandemic and was offering no new contracts for next season.

Matt, 30, has been an influential figure since signing a two-year deal at Rodney Parade in the summer of 2018, making 97 appearances for the Welsh club.

"The last two years have been brilliant and there have been some great memories which I am proud to be a part of when I look back," said Matt, one of a number of players leaving the club.

"The boys are some of the best I've played with, on and off the pitch, and some have become very close friends.

"It's not the way I envisioned leaving the club but we will cross paths again, I'm sure."

Matt formed a brilliant partnership with Irishman Padraig Amond and scored 20 goals in his first season - including a powerful header in a famous FA Cup win against Premier League club Leicester City - which narrowly failed to win promotion to League One when they lost the play-off final 1-0 to Tranmere Rovers.

Matt failed to hit the same heights this season, when Newport finished in mid-table after the fixture list was cut short because of the pandemic, but remained an influential member of the match day squad with 40 appearances, scoring six times.

Having begun his career in the football conference for Kidderminster Harriers, Matt moved to League Two side Fleetwood Town in 2012 and moved on to Blackpool four years later following loan spells at Stevenage and Plymouth Argyle.

He featured for Grimsby Town on loan before arriving at Newport.

The outbreak forced a near three-month break in the football league, triggering widespread financial difficulty among clubs.