Aguero to see specialist in Spain about ‘damaged’ knee 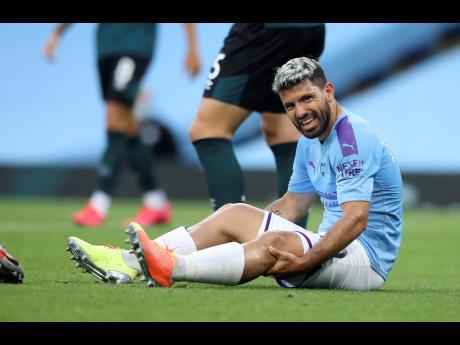 Manchester City’s Sergio Aguero reacts as he sits on the pitch injured during the English Premier League match between Manchester City and Burnley at Etihad Stadium in Manchester, England, on Monday, June 22, 2020.

Manchester City striker Sergio Aguero will travel to Barcelona to assess the extent of a left knee injury.

The club's all-time leading scorer hobbled off at the end of the first half of City's 5-0 win over Burnley in the Premier League on Monday.

The Argentina striker posted on Twitter that scans taken yesterday "confirmed that I have damaged my left knee".

"It's a pity," Aguero said, "but I'm in good spirits and so focused to come back as soon as possible."

City didn't give a time frame for Aguero's return, saying in a short statement the striker would be seeing Dr Ramon Cugat in Barcelona.

Aguero's absence leaves City with just one recognised striker, Gabriel Jesus, as the team works to negotiate its way through a hectic schedule following the resumption of football after the coronavirus outbreak.

City have eight more league games to play before the Premier League finishes on July 26 and are also in the FA Cup, which resumes at the quarter-final stage next weekend.

City are also still involved in the Champions League, which will restart at the last-16 stage in August. The team leads Real Madrid 2-1 after the first leg in Spain.