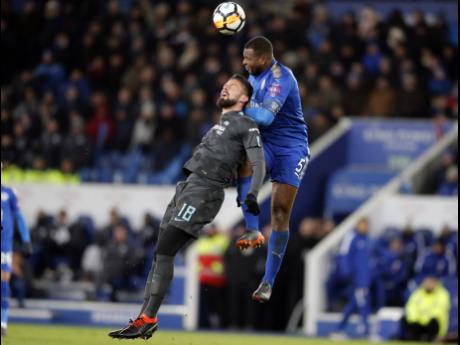 When the English Premier League (EPL) returns tomorrow after a three-month hiatus due to the COVID-19 pandemic, the clubs will be united in support of black civil rights because of the work of former Jamaica international defender Wes Morgan.

The Leicester City defender and Watford striker Troy Deeney spearheaded an initiative for EPL players to show solidarity with the calls for racial equality. The Premier League confirmed on Friday that for the first 12 matches after resumption, the players names will be replaced with 'Black Lives Matter' (BLM). Additionally, a Black Lives Matter logo will be on display for the rest of the season, as well a badge thanking the National Health Service for their work during the pandemic.

"The leadership from Troy [Deeney] and Wes Morgan in driving this forward with the support of their fellow players and the Premier League's leadership cannot be understated. We [are] proud of you and everyone that made this happen," he said.

Racial tensions have escalated with the death of George Floyd, an unarmed black man while in the custody of white police officers in Minneapolis, Minnesota, last month. It led to protests throughout the United States and globally.

In a statement released by the players, they were resolute in their desire to combat racism.

"We the players stand together with the singular objective of eradicating racial prejudice where it exists to bring about a global society of inclusion, respect and equal opportunities for all regardless of their colour or creed," the statement read.

Additionally, the league voiced its support for those who wished to "take a knee" before or during matches. Former NFL player Colin Kaepernick began the practice in 2016 in silent protest during the American national anthem.

The EPL resumes with Aston Villa facing Sheffield United and Manchester City hosting Arsenal. All games for the remainder of the season will take place without fans in attendance.