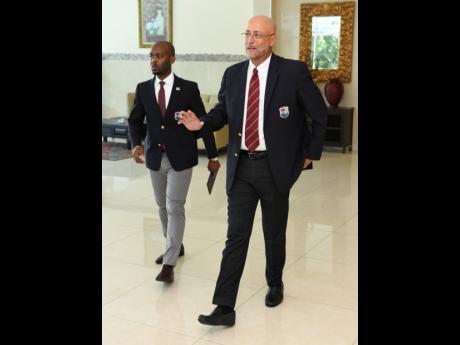 Cricket West Indies (CWI) vice-president Dr Kishore Shallow has given the organisation's administration a passing grade for its first year in office, pointing to improvements in just about all areas of the 10-point plan that the Ricky Skerritt-led team had used as a platform for election.

Among the biggest achievements, Shallow said, have been an improvement in team selection, which has boosted players' confidence in getting a fair chance to represent the West Indies, and a better relationship with CWI stakeholders.

Last March, the Skerritt-Shallow team defeated incumbent Dave Cameron and his running mate, Emmanuel Nathan, to take over the CWI leadership. They presented a 'Cricket First Plan' to revitalise West Indies cricket that promised the creation of a cricket-centric organisational culture, optimum use of technology for greater effectiveness, increased investment in grass-roots cricket, the enhancement of the franchise system, the modernisation of coaching education, increased exposure for Under-23 and Under-19 players, a re-evaluation of the system of team selection, the repairing of stakeholder relations, the decentralisation of the High Performance system, and the utilisation of regional technical expertise.

"We have touched on just about all of these points," Shallow said. "In West Indies cricket, over the years, we have had quite a few hurdles that we have had to jump over, and bearing all that in mind, I think we have done a fairly good job for the last 12 months."

Among the areas he gave his team kudos for was revamping the selection process.

"This is one of the successes," he said. "We have seen players have increased confidence in our system again, and players believe that they are now selected more on merit and are putting up their hands, as Jermaine Blackwood, as Hayden Walsh, and other players have done."

Shallow also saw the CWI's utilisation of regional experts as an accomplishment.

Seven months after the new administration took office, Phil Simmons, who had been sacked by the Cameron-led CWI, was brought back as West Indies head coach.

That, said Shallow, plus the inclusion of other former cricketers Floyd Reifer, Kenny Benjamin, Gus Logie, and Courtney Walsh in the coaching staff and the involvement of Joel Garner, Brian Lara, and Ramnaresh Sarwan in West Indies camps last year, demonstrated the CWI's commitment to improving the game.

The CWC vice-president also pointed to improved relationships with players, regional governments, and the media, saying, "All of our stakeholders are equally important to us."

Speaking specifically about the promise to create a cricket-centric organisational culture, he said CWI has been able to fulfil its promise to move players "to the top of the priority ladder".

The number two at CWI said the organisation was fully committed to doing what it was voted in to do.

"We continue to address all the items on our 10-point plan, and we are using this as a guide to ensure that we keep performing," he said.