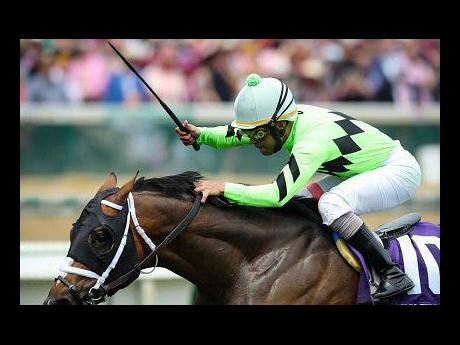 Going a mile and eighth for the four-year-olds and upward in race 10, Bridgmohan set a brisk pace with the five-year-old bay before storming to the wire in a track record time of one minute, 47.21 seconds.

Eleven-to-one chance Dontblamerocket finished three lengths behind in second while Rockemperor ran on for third, as favourite Instilled Regard was a disappointing sixth underneath John Velazquez.

"He ran his eyes out today," said Bridgmohan who won twice on the day's 12-race programme at the southern United States racetrack.

"He is a very cool horse to ride because basically, he does all the work himself."

Bridgmohan had earlier opened his account in the $50,000 race two over a mile with favourite Dreamalildreamofu, bringing the bay filly from off the pace to snatch the lead at the five-sixteenth and beat the three-year-old maidens by three lengths.

However, it was race 10 - one of eight added-money races on the day's card - where Bridgmohan took centre stage with the Brad Cox-trained Factor This. He emerged from a bunched up field to take the early lead, posting 23.49 seconds for the first quarter and 47.94 for the half.

Marzo tracked from second, Dontblamerocket stalked from third while Secretary of War, who eventually finished last, sat comfortably in fourth.

Factor This bossed the backstretch but approaching the turn, Colby Hernandez brought Marzo to challenge as the race turned for home.

However, Bridgmohan roused the front-runner and she responded brilliantly, pulling away from the field with a gallant run and really had no challengers in the stretch run.