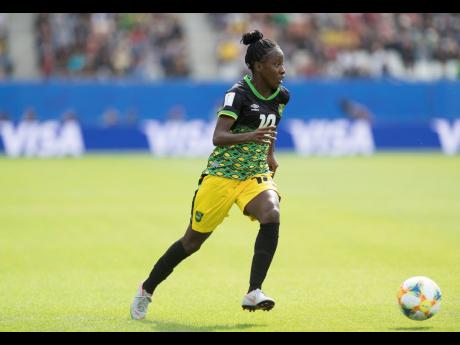 The Under-20 Reggae Girlz bowed out of the Concacaf Championships following a disappointing 2-1 defeat by hosts Dominican Republic in yesterday's quarter-final. At half-time the teams were locked at 1-1 after Jody Brown slammed in her ninth goal of the tournament in the 37th minute to cancel out a 35th minute opener by the Dominican Republic's Christina Garcia. The home team got the winning goal 73 minutes into the contest when Mia Gayle Asenjo got by her marker and slotted the ball under goalkeeper Ella Dennis. Hubert Busby, the adviser to head coach Xavier Gilbert, said the coaches were 'proud' of the ladies' performance throughout the entire tournament but they were very disappointed to drop out at the quarter-final stage.

"It was not the result we wanted but we are very proud of the players. From the start of the tournament they have showed their character and up until the 90th minute of today's game we were still fighting and showing the Jamaican spirit," he said.

Proud of the fight and character

"We had opportunities and we didn't take them. They took theirs and that is why they are into the semi-finals. It could have been better from us but we are proud of the fight and character that these young ladies showed, and we are pleased that a number of these players have another Under-20 cycle," he told STAR Sports.

"Going into the tournament, we wanted to qualify for the World Cup, although we knew we were missing five players from our senior team because of injury and school commitments. But it was an opportunity for others to step up and that they did and we are very proud.

"It's just unfortunate that we didn't get to the round that would put us in a position to qualify, so we are disappointed not to qualify but we are really proud of the girls," he said.