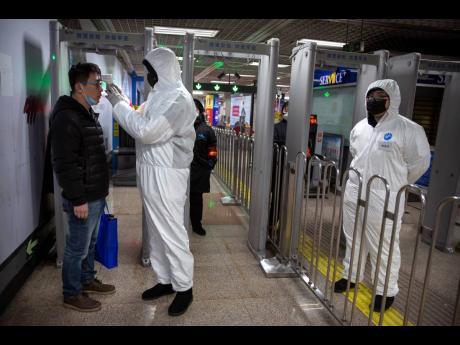 A worker wearing a hazardous materials suit takes the temperature of a passenger at the entrance to a subway station in Beijing, China, Sunday. The new coronavirus has accelerated its spread in China.

World Athletics has postponed its Indoor Championships by a year because of the Coronavirus now plaguing the host country China.

The athletics' world governing body, formerly known as the IAAF, said in a statement that the decision was made in light of the spread of the virus which has now killed more than 130 people.

"We know that China is doing all it can to contain the new Coronavirus and we support them in all their efforts but it is necessary to provide our athletes, Member Federations and partners with a clear way forward in what is a complex and fast-moving set of circumstances," said a spokesperson from World Athletics.

"We have considered the possibility of relocating the event to another country and would like to thank the cities that have volunteered to host the championships. However, given concerns still exist regarding the spread of the virus outside China, we have decided not to go with this option, as it may lead to further postponement at a later date," the spokesperson added.

The Championships were set to be held in Nanjing, from March 13 to 15 this year.

This city is about 330 miles away from Wuhan, where the virus originated.