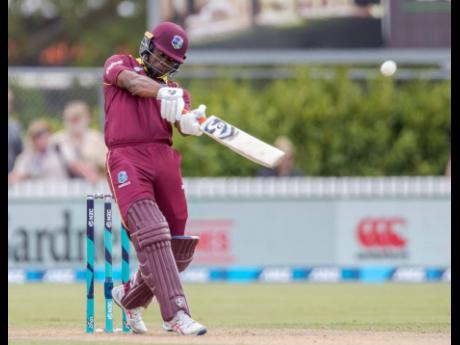 Opener Evin Lewis made up for his heartbreak of six days ago with a third one-day international hundred as West Indies completed a whitewash of Ireland with a straightforward five-wicket victory in the third ODI yesterday.

Chasing a revised target of 197 off 47 overs after rain intervened in their initial pursuit of 203, the Caribbean side encountered little issues as they coasted home at the Grenada National Stadium.

Lewis, who was left stranded on 99 when West Indies won the opening game last Tuesday in Barbados, made amends with a superb 102 off 97 balls, while fellow left-hander Nicholas Pooran finished unbeaten on 43 from 44 deliveries.

Brandon King struck 38 off 43 balls as West Indies recovered from the cheap dismissals of Shai Hope (6) and Sunil Ambris (6) to complete their second series whitewash in the space of three months.

Leg-spinner Hayden Walsh jr had earlier snatched four for 36 as Ireland once again failed to post a challenging total and were dismissed for 203 off the first ball of the final over.

Speedster Oshane Thomas, a surprise inclusion after not being listed as part of the 14-man squad, finished with three for 41, while off-spinner Roston Chase showed his worth with two for 53 after missing the second ODI in Barbados on Thursday.

Captain Andy Balbirnie top-scored with a polished 71 from 93 balls but he found little support, with only Andy McBrine (25 not out) and Kevin O'Brien (21) managing to get out of the 20s.