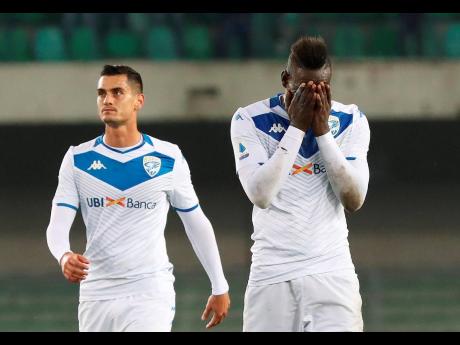 Brescia’s Mario Balotelli (right) reacts at the end of the Italian Serie A match against Verona at the Bentegodi stadium in Verona on November 3.

The ball that Mario Balotelli angrily kicked high into the stands out of frustration because of racist chants is still travelling.

In a Serie A season that has been marred by discriminatory slurs from the outset, Balotelli's outburst has prompted more debate, more outrage and more indignation over the problem of racism inside Italy's stadiums than any other case.

"I am not saying that I am different from the other players who receive the same abuse, the same monkey noises, but the problem is that I am Italian," said Balotelli, who was born in Italy to Ghanaian immigrants and has represented the Italian national team.

Luca Castellini, the leader of the Hellas Verona 'ultra' fan section that directed the racist chants at Balotelli and a leader in the far-right party Forza Nuova in Verona, sees it in his own way.

"Balotelli is Italian because he has Italian citizenship but he'll never be fully Italian," Castellini said Monday, a day after the incident during the second half of the Verona-Brescia game.

Castellini's comment caught the attention of Liliana Segre, an 89-year-old Auschwitz survivor and Italian senator who recently proposed a parliamentary commission against anti-Semitism.

"They're still judging people by the colour of their skin?" Segre said. "There's a good reason why this commission should get to work straightaway."

Vincenzo Spadafora, the government minister for sport and youth policies, chimed in and ordered Hellas Verona and the city's mayor - who had denied the existence of the racist chants - to condemn Castellini.

Verona responded by banning Castellini from their stadium until 2030 - adding on to a previous ban through 2022 - and the Italian league ordered part of the Bentegodi Stadium closed to fans for the team's next home match, noting that the chants "were clearly audible".