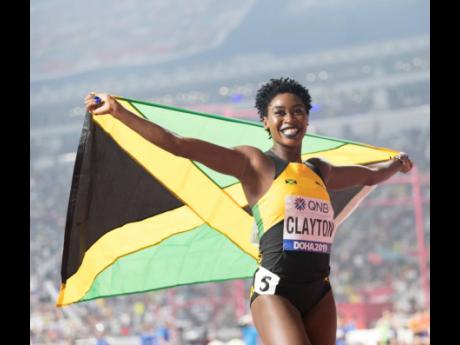 Rushell Clayton of jamaica is ecstatic as she celebrates a bronze medal in the women 400m hurdles final at the 2019 IAAF World Athletic Championships held at the Khalifa International Stadium in Doha, Qatar on Friday October 4, 2019. 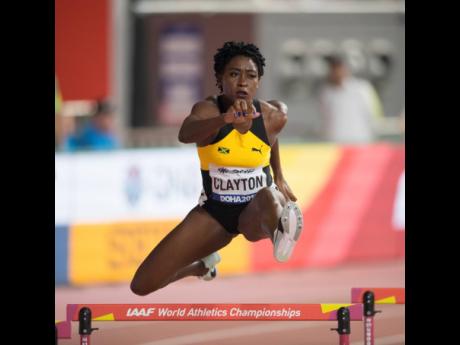 Rushell Clayton competes in the final of the women’s 400m hurdles final at the recently concluded Doha World Championships.
1
2

Rushell Clayton is still learning how to deal with amusements of stardom. "My life has changed in so many ways. I can no longer walk on the street as a regular athlete," she told STAR Sports. "[But] it's actually a great feeling. I feel good."

Her life changed after she won a bronze medal in the women's 400m hurdles race at the Doha World Championships, two years after she seriously contemplated to retire from the sport.

"I went to a restaurant and I'm cashing and the cashier is addressing me by my name," she recalled. "And I was like huh? And she was like Hi Miss Clayton, Welcome! "I was like Oh! this is what it's like."

She continued: "I told my coach that I didn't sign up for this part at all!"

The former Frome and Vere Technical athlete captured the bronze medal in the fastest women's 400m hurdles race in history earlier this month in a personal best time of 53.74 to finish behind Americans Dalilah Muhammad and Sydney McLaughlin, who registered 52.16 and 52.23, respectively.

Muhammad's effort lowered the world record of 52.20 she set in the event in July at the US National championships.

While she is still navigating through the rewards of success, she finds satisfaction and appreciation most from the ones closest to her including her sister, who now sees her as a role model, something that she is touched by.

"She would call me and still say: "I believe that I can do this because you did this and you have been through so much." So that makes me feel so good to know that I can be a role model to my younger siblings," she stated.

Clayton joined an exclusive club of Jamaica female athletes who have won medals in the women's 400m hurdles, a list that features Deon Hemmings, Melaine Walker, and Ristananna Tracey. The 27-year-old was not aware of this achievement until her psychologist informed her recently.

"He was like now you are part of history! I didn't know that I was the fourth person in the history of Jamaica to do this. But it feels good. It feels amazing to know that it's your first World Championships and I could add to history. So its really amazing," she said.

Clayton returned to training yesterday after a two-and-half week break and she is itching to get back into the swing of things with the Olympics coming into focus. Her motivation is now heightened after seeing what is possible.