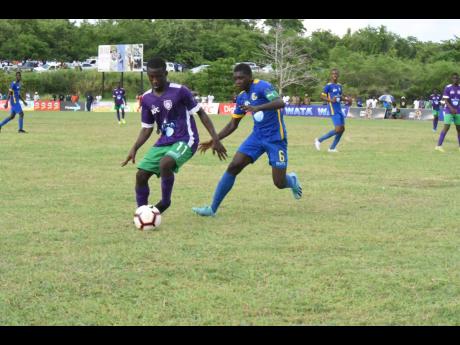 Deano Thomas opened the scoring for William Knibb 16 minutes into the game before their talisman Christojaye Daley netted his 12th goals in nine games to double the lead in the 40th.

William Knibb continued to apply the pressure with Daley providing a brilliant assist to get Mark Lewis on the scoresheet in the 66th. The visitors managed to score a consolation three minutes from fulltime when Joseph McFarlane stabbed home a rebound.

Coach Dwight Jeremiah, who commended his boys' performance, admitted they had a point to prove against Spot Valley, who defeated them 4-0 in their away encounter.

"Yes, it was crucial. We were in a good position but needed at least a point to secure top spot. It was a good performance and I have to commend the boys. If you want to be supercritical, you would prefer coming away with a clean sheet but I guess it happens with youngsters who are still learning the game," Jeremiah said.

"The boys were pumped up for it because they believed that Spot Valley wasn't better than them, despite going down (4-0) in the first leg. They got two goals from our errors so we knew if we could clear those up and be better on the football then we should be able to win. We wanted to prove that because they are the only team to beat us and the boys wanted to get back one over them to prove that Knibb is not only winning but dominating teams in the zone," he added.

Looking ahead to the second round, Jeremiah noted that they will have to improve their finishing and possession game if they are to continue to do well.

"When it comes to the second round we are going to almost have to have a perfect game because we are coming from over a hundred to 32 teams, so I guess any team you get is going to be up maybe two or three levels. I think what we have to do is protect the ball a little bit more as we want to play a possession game. Also, we have to take our chances because we can't miss as many chances as today and still win like we did," Jeremiah said.