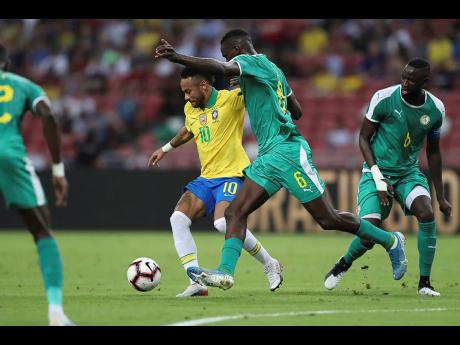 Brazil was held to a 1-1 draw by Senegal yesterday in a friendly in Singapore that marked Neymar's 100th match with the national team.

Roberto Firmino opened the scoring in the eighth minute with a lob over the goalkeeper, but Famara Diedhiou equalised from the penalty spot just before the end of the first half.

It was Brazil's third consecutive match without a win.

After lifting the Copa America title in July, Brazil have drawn 2-2 with Colombia and lost 1-0 to Peru. They will have a chance to end the winless streak on Sunday in a friendly against Nigeria, also in Singapore.

"If I said this doesn't bother us, I would be lying," said defender Thiago Silva. "In the last three matches we could not play our best. Today we had the best opportunities, but we failed in the details, in the last passes to score."

Veteran Dani Alves blamed the long flight and the jet lag for the poor performance.

"I am not trying to find excuses, we could have done better, but it is a trip that wears us out," he said. "We need to win to have tranquillity in the preparations for World Cup qualifiers next year."

Brazil coach Tite acknowledged that his team's performance was below par against Senegal, the second African team he has faced since he joined in 2016.

"We also had difficulties in the 1-0 victory against Cameroon in November. African teams want contact, they are compact and they are strong in the air. We are still finding the best way to play against African teams," Tite said.

Neymar started the game, played in a half-empty stadium, but could not add to his career haul of 61 goals for the national team. The 27-year-old striker is only one goal behind two-time World Cup winner Ronaldo, who is in second place on Brazil's all-time list of top scorers.