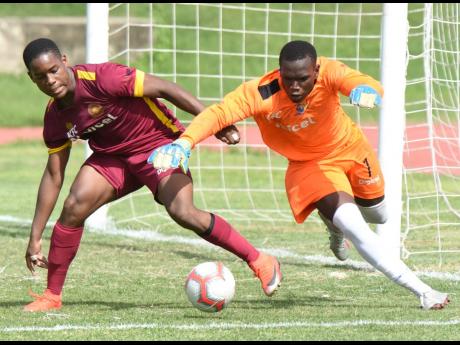 Tarrant High goalkeeper Jonathan Currie (right) getting to the ball ahead of Zhavier Lynch of Wolmer’s Boys during yesterday’s ISSA/Digicel Manning Cup match at the Stadium East field. Wolmer’s won 3-0.

Wolmer's Boys kept up the pressure on Group E leaders Jamaica College with a 3-0 win over Tarrant High in their ISSA/Manning Cup match yesterday at the Stadium East field.

The maroon and gold-clad Wolmer's are yet to be beaten in this year's campaign. They registered their sixth win of the season and moved up to 20 points and solidified their position in second place behind Jamaica College (25 points). JC also won yesterday, they blanked Innswood 4-0

An own goal by Tarrant goalkeeper Jonathan Currie broke the deadlock four minutes from the end of the first half and second-half strikes from Revaldo Mitchell and Shanour McLean powered Wolmer's towards victory.

Wolmer's assistant coach, Irvino English, acknowledged that it was a tough encounter. "We had to work really hard for this victory today," he said after the game. "We knew that Tarrant were going to come out and fight because the last time we met it was 2-2,"he added.

Head coach of Tarrant High Calvert Fitzgerald said that his team gave their all but were just outdone by the quality of the opposition. "We have a pretty reasonable starting 11 but this Wolmer's team is stacked deep," he said. "We wanted to stay in the game for as long as possible. [Had it not been for] the first goal which came via an error by our goalkeeper, we would have gone into half-time 0-0. But I thought we gave it our best shot. But this Wolmer's side is just better than my team at the moment."