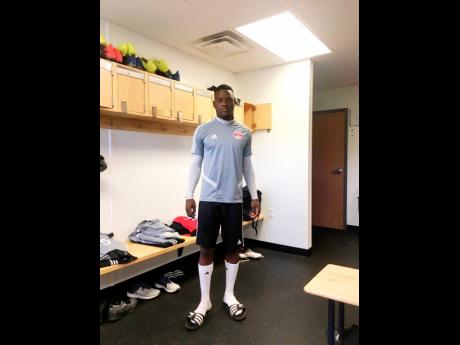 Lacovia High School student Rajay Wright has moved a step close to his dreams. The 17-year-old is currently on trials with New York Red Bulls in the United States.

Wright, who is an aggressive and skilful striker, was spotted while playing for the Jamaica Under-17 team recently in the Concacaf tournament in Florida. He netted a hat-trick for the young Reggae Boyz against Bermuda earlier this month.

“It all started from the World Cup Under-17 qualifier that was held in Florida, where they came and watched me play,” said Wright, who played locally for St Bess United in the Manchester/St Elizabeth Super League.

Wright is now in his second week at the American professional soccer club based in Harrison, New Jersey. The club competes as a member of the Eastern Conference of Major League Soccer.

“I feel really happy here,” said the scorer of 15 goals during last season’s daCosta Cup. “I really appreciate that I’m here, because it’s just a stepping stone for me towards my goals.”

The striker is confident that things will work out for him.

“I expect to come out of this trial successfully. I will do so by working hard, playing hard, and following the coach’s instructions. I feel positive that I will get a contract here,” he said.