Frome past student donates to school 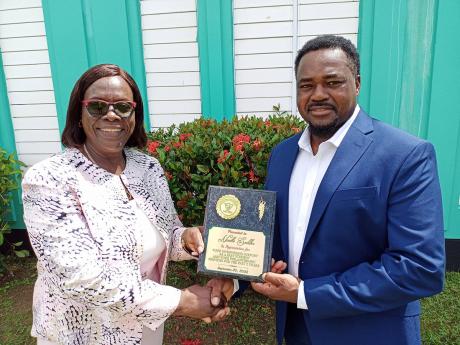 Dorrset Taylor, acting principal of Frome Technical High School (left), presents a plaque to Neville Saddler, after the past student donated $500,000 to the school this week.

Frome Technical High School in Westmoreland received a major boost after the institution was presented with a cheque valued at $500,000 by one of its past students, Neville Saddler.

The United States-based Saddler visited the school on Tuesday where he handed over the cheque as well as books, pencils and pens.

A member of the Class of 89, Saddler said he was happy to give back to his alma mater. He has called on other past students to make contributions to the school as well.

"I have reached out to a lot of my 1989 year group, and I hope today they will see this and continue what I am trying to do here for the school," Saddler said.

Merlene Spence-Williams, a member of the Class of 1989, said Frome Technical helped to mould her into what she has become today. She felt overjoyed that they are able to contribute to the give-back.

Dorrset Taylor, acting principal at Frome Technical High School, said it was the second consecutive year that Saddler was contributing to his school.

"He was here last year and presented a cheque of $300,000 to the school for the technical department, and now we see him here today, making another contribution to the school," Taylor said.