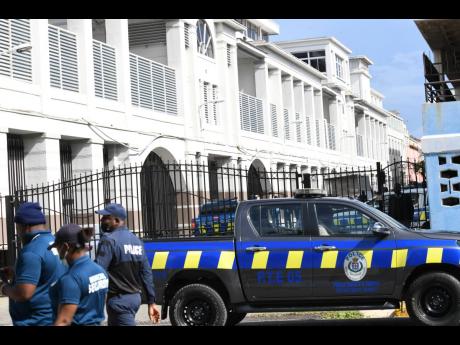 Police outside the Home Circuit Court in downtown Kingston where the alleged members of the Clansman gang are being tried.

A self-confessed member of the One Dong gang yesterday testified that Andre 'Blackman' Bryan, the alleged leader of the One Don gang, ordered and planned the murder of an alleged St Catherine community don in 2017.

The man, who was reportedly aligned to the Tesha Miller faction of the Clansman gang, was gunned down at Price Rite in St Andrew, by three alleged gang members, who he identified as Danny, Squeeze Eye and Fancy Cat. The witness is testifying in the Home Circuit Court via video link. The One Don gang is a splinter of the feared St Catherine-based Clansman gang which is allegedly headed by incarcerated murder convict, Tesha Miller.

The August 2017 murder, however, was one of two killings detailed yesterday by the witness during day one of his testimony before Chief Justice Bryan Sykes.

Witness Two, who will be identified as such by virtue of a court order, testified that he was not only Bryan's personal driver but was also the gang's banker.

The witness said on the day of the murder, they were instructed by Bryan to return to kill the man and that two different alleged gang members who he identified as 'Frazzle', now deceased, and 'Sussman' went with him to collect the guns before going to Price Rite.

On their arrival, the witness said he and Frazzle parked in the car and waited, and after hearing a gunshot drove out on to the road where they saw Sussman running towards the car with a gun in his hand.