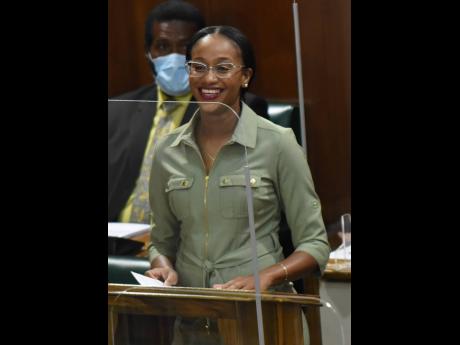 Central Manchester Member of Parliament Rhoda Crawford has spoken glowingly about her achievements since assuming the reins of the constituency a year ago.

On Tuesday, Crawford, speaking in the State of the Constituency Debate, said that several roads have been repaired in the constituency, through her ROAD-A-Fix programme. According to Crawford, who wrested the seat from the hands of the People's National Party's Peter Bunting in the general election last year, $23.5 million has been spent to rehabilitate and patch roads in Top Coffee Grove, Tulsa Road, Bottom Coffee Grove, Throwers, Ingleside, Blue Mountain, Mandeville town, Barnstaple and Manchester Road.

Crawford said that she has submitted a project proposal to Everald Warmington, minister without portfolio in the Ministry of Economic Growth and Job Creation, for the rehabilitation of roads along the Mandeville to Rudd's Corner, Royal Flat to Old England and Williamsfield to Cumberland corridors.

"I am happy to report that the honourable minister has approved $60 million for these rehabilitations, which will benefit several communities and thousands of road users. The procurement exercises have now been completed and work will commence this Saturday, September 25," Crawford said.

On the issue of water, the first-term MP said that work has started on phase three of the Greater Mandeville Water Supply Improvement Project. The project is being undertaken at a cost of $2.7 billion, and when completed will benefit more than 35,000 constituents.

Crawford said she has donated 100 water tanks to homes and churches under the Give A Black Tank Drive, and has dedicated $2.5 million to the trucking of water to communities that are not serviced by the National Water Commission.